Review: THE YEAR OF THE MONKEY 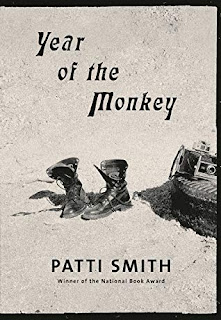 The Year of the Monkey by Patti Smith. My first introduction to Smith. I purchased this book thinking it was a book of her poetry. It is not. Reading it was a very disorienting experience---as if I were witnessing someone else's dreams and not having a clue what was going on. Some of the prose were remarkable for their brilliance and the ending wrapped up quite cleverly but I would caution folks who aren't Patti Smith fans to approach this book with caution.

Several reviewers of Goodreads had better insights than me. Let's hear from them---


Alternating between lucid memoir and mystical, dreamlike sketches of the world around her, Patti Smith spends The Year of the Monkey dreading and mourning the loss of her friends and America as it once was. It's strange, beautiful, troubling, comforting. (Tyler Goodson)

Seems like people either love this one or are bitterly disappointed. Count me among those who love it. For a few of my grad school years, I lived within a mile of Santa Cruz’s Dream Inn, which is where the story begins. Loved the way its sign signified so much throughout, especially the thin line between dreaming and reality. Smith’s writing here, particularly the magical realist moments, is stunningly beautiful and powerful. (Karen deVries)

All who read Patti Smith acknowledge an authenticity in her ideas, observations and truths we can relate to. There is an intimacy with us that offers wisdom of how to live without pretense. The clatter and chaos of daily life which has intensified since 2016 has caused us to acknowledge Antonin Artaud's quote, A mortal folly comes over the world. It seems like she has dimmed the lens of her Polaroid to offer truths of how we now live along with clear remedies for the present...HOPE. (Cheryl Kennedy)

And then those thoughtful, sometimes humorous quotes---

“Nothing is ever solved, Solving is an illusion. There are moments of spontaneous brightness, when the mind appears emancipated, but this is more epiphany.”


Smith had misgivings all year, because it was the year of the monkey. At one point she muses on these misgivings and wonders how anything good can come from an election that happens in a Year of the Monkey. After the election, as Christmas is approaching, she writes---


“How did it come to such a bad end? Another case of imbalanced social outcry. Silent, silent night. Assault rifles wrapped in foil stacked beneath artificial trees decorated with tiny golden calves, targets set up in the backs of snow-covered yards.”

I understand that her National Book Award winning memoir, Just Kids, is quite good so I will leave it on my reading list but I don't think I'll add any others.

-Anne
Posted by Anne@HeadFullofBooks at 1:50 PM