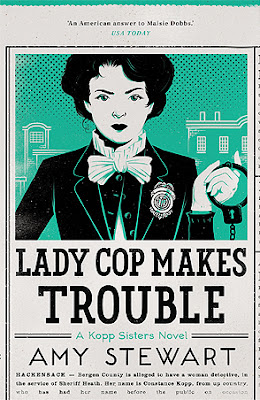 
Miss Constance Kopp, who once hid behind a tree hear her home in Wycoff, N.J., for five hours waiting to get a shot at a gang of Black Handers who had annoyed her, is now a Deputy Sheriff of Bergen County, N.J., and a terror to evildoers. --New York Press, December 20, 1915


"But you're the ladies' matron. You can't guard a male inmate," he said, in a simpering, singsong voice, the way a little boy delivers taunts. "Sheriff won't like it."

Summary: After besting a ruthless silk factory owner and his gang of thugs in Girl Waits With Gun, Constance Kopp becomes the first female deputy in the county. But when a German-speaking prisoner cons her and escapes, she wants to make things right by capturing him, not only for her own reputation but also for Sheriff Heath. Constance takes the advice to follow her instincts and not do exactly what the police are already doing to find and recapture him. Her instincts take her all over New York City. Along the way she makes friends with other women who help her cause.

Review: Lady Cop Makes Trouble is the second book in the Kopp Sisters series, based on actual people and events. The author has taken the bones of the story from newspaper clippings of the day and created a delightful series with quirky, interesting characters. The Book Beginnings quote is an actual quote written and published in 1915. In the Friday56 quote, Constance is fighting with another deputy who doesn't respect her as a fellow officer.

Several years ago I read and recently reread the first book in the series, Girl Waits with Gun. I used it as a book for my Friday Quotes memes here. It and all the books in the series are part of this month's all-county library activity called PierceReads! Evey year one book (author, or series) are highlighted and programs are set up to promote them. I actually liked Lady Cop Makes Trouble better between the two. There was more detective work and less about the home life of the Kopp sisters. Familiarity with the characters allowed for a  focus on the crimes. My husband, who listened to both of the audiobooks with me, commented that it felt like the writing was done in the early 1900s style and it was a bit pretentious. It bothered him. I reminded him of the opposite, how odd it is to read a book set in historical time when a character uses current day slang. Point made, he and I both enjoyed the two books.

There are four more books in the series which I am not sure if I will get to before the author event on March 28th but I do hope to read them some day. The titles of each book are taken from headlines or news stories from the early 1900s. Aren't they clever?


Book Beginnings on Friday is hosted by Rose City Reader. Share the opening quote from current book.The Friday56 is hosted at Freda's Voice.  Find a quote from page 56 to share.
Visit these two websites to participate. Click on links to read quotes from books other people are reading. It is a great way to make blog friends and to get suggestions for new reading material.
-Anne
SOTH Book Club March 2020
Posted by Anne@HeadFullofBooks at 3:38 PM