Review and quotes: LETTERS OF NOTE 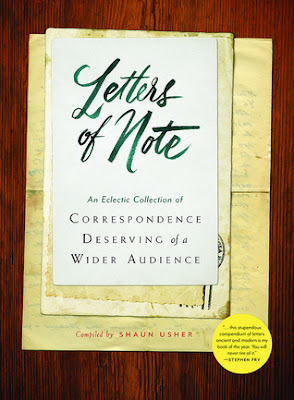 Title: Letters of Note: An Eclectic Collection of Correspondence Deserving of a Wider Audience compiled by Shaun Usher

Book Beginnings quote from the introduction---


Dear Reader, The beautiful book you now hold in your hands is the culmination of an unexpected but wholly enjoyable four-year journey through the letters, memos, and telegrams of the famous, the infamous and the not-so-famous...[the letters] perfectly illustrate the importance and unrivaled charm of old-fashioned correspondence just as the world becomes digitized and letter writing becomes a lost art.


To my old Master, Col. P.H. Anderson, Big Spring, Tennessee. August 7, 1865.
Sir: I got your letter, and was glad to find that you have not forgotten Jourdan, and you wanted me to come back and live with you again, promising to do better for me than anybody else can. I have often felt uneasy about you. Although you shot at me twice before I left you, I did not want to hear of you being hurt, and am glad you are still living.

Summary: This is a spectacular collection of 125 letters from the famous and not-so-famous, as the introduction says. Some are whimsical, others serious or hilarious, and often enlightening. Many of the letters are written by still-living famous people like the Queen of England while others were penned by long-departed people like Ronald Reagan and Mark Twain. Each letter is accompanied by a short introduction to let the reader know who wrote the letter and under what circumstances. For example the opening letter was written by Queen Elizabeth to President Eisenhower. Apparently he liked her scones when he visited England on a state visit in August 1959. She sent him her recipe. The Friday56 quote came from a letter written by a former slave to his former master, who had written him, asking that he return to service. The former slave, Jourdan Anderson, was living and working in Ohio at the time and all of his children were attending school. In the letter Jourdan calls into question if his children would be able to go to school if he were to return. He concludes the letter with this sign-off: "Say howdy to George Carter, and thank him for taking the pistol from you when you were shooting at me. Your old servant, Jourdan Anderson."

Review: I enjoyed this book immensely. It is a large volume which not only includes copies of the letters but also interesting photographs of writers. If the handwriting was hard to decipher, or written in another language, it was typed (and translated) for easy reading. I didn't read every word of every letter, but I spent enough time with each to get a feel for the purpose the personality of the writer. A few of my favorites were the above mentioned letter from a former slave to his master; a letter from E.B.White (Charlotte's Web) to a man who was concerned about how everything was wrong with the world. White writes that sometimes, like with weather, things change quite suddenly. People make messes of the planet yet within others there are the seeds of goodness, inventiveness, ingenuity that can lead us out of trouble. In the conclusion, which seems so apt today, E.B. said, "Hang onto your hat. Hang onto your hope. And wind the clock, for tomorrow is another day."

Another favorite was a letter written by a young Australian teen boy right after Sputnik had sent the first rocket into space. He wrote his letter to "A TOP Scientist at Woomera Rocket Ranch in South Australia. URGENT." and it included a hand-drawn diagram of a rocket with Australian markings, Rolls-Royce engines, air torpedoes and radar antenna. Underneath the diagram he included these words, "YOU PUT IN OTHER DETAILS." His letter wasn't answered until 52 years later by Allan Paul, a research leader in aeronautics.  Paul complimented the boy, now man, for his directions to "put in other details" stating he thought that proof he would make a good project manager one day. How the letter when unanswered for such a long time was also addressed.

I marked several other letters to show my husband. One was a hand written note from Clyde (of Bonnie and Clyde fame) to Henry Ford thanking him for building such a powerful car. Later that week we watched a movie about the highway men who finally brought down Bonnie and Clyde. At one point in the movie they showed the newspaper clipping about that letter. Another highlight for me was a note written by the composer Samuel Barber to his mother when he was child. In the note he apologizes for not wanting to play football saying, "I am not meant to be an athet [sic]. I am meant to be a composer...don't ask me to forget this unpleasant thing and go play football." It is as if he sees in himself something he wishes he didn't.

I don't think this review is doing the book justice. Just go find a copy of it at your public library (when it opens up again, and read it for yourself!

Book Beginnings on Friday is hosted by Rose City Reader. Share the opening quote from current book.The Friday56 is hosted at Freda's Voice.  Find a quote from page 56 to share.
Visit these two websites to participate. Click on links to read quotes from books other people are reading. It is a great way to make blog friends and to get suggestions for new reading material.
-Anne