Don't know about you, but I am finding it hard to get on with life-as-usual these days even though as a retiree I often don't go out every day, now that I can't I want to! Yesterday as I was cleaning up the kitchen after dinner the thought occurred to me that I have nothing planned that I have to do this coming week. NOTHING. My dentist appointment was canceled, as was my therapeutic massage. I can't make any coffee dates with friends. Book club is on a two month hiatus, maybe longer. So how do I fill my days? With walks, books, puzzles, and TV. I am trying to stay up on my daily devotions, but find that my mind wanders. I even have trouble reviewing the books I'm reading. My malaise is slopping over onto my blog.

So today, I decided to share with you a few things that really make me angry, other things I find very funny, and lately what is bringing me hope. Click on hyperlinks to call up articles or to view videos. Sit back, sip your coffee/tea and take your time. Here goes...

To begin with, I want to remind you, as does this song, that God is with us during these scary days. If you read nothing or open no articles, at least listen to this song.


The Infuriating Story of How the Government Stalled Coronavirus Testing and article from GQ magazine from March 16th. It is a lengthy and detailed article, worth the read but here is one very disturbing detail which really gets my blood roiling:


A large part of the blame lies with President Trump, who has not wanted widespread testing, apparently out of an obsession with keeping the number of confirmed COVID cases low. It’s why he waffled so long on whether to let the Grand Princess cruise liner, where COVID infections were spreading rapidly, dock in the United States. “I would rather have them stay on [the ship], personally,” Trump said earlier this month. “I don't need to have the numbers double because of one ship that wasn't our fault.” His administration turned down tests provided by the World Health Organization and instead wasted precious time having the Centers for Disease Control create its own test. While that was underway, the president denounced the spread of the disease as a Democratic hoax, giving the public a dangerously false sense of complacency just as a pandemic was getting underway.

Rand Paul, US Senator from Tennessee, just tested positive for COVID-19, Palmer Report, March 22nd. Apparently he took the test five or six days ago and then did not self-quarantine while he was waiting for the results. His father, a retired US Congressman has been making noises that he thinks the coronavirus pandemic is a hoax.


This means he’s spent a week running around infecting people while he was awaiting his test results. This means he put a significant number of lives at risk – including potentially the entire Senate. Not shockingly, a number of Senators are angry at him, including some of his Republican colleagues.

The Federal Government Outbids State Governments on Critical Coronavius Supplies After Trump Tells Governors To Get Their Own Supplies, Business Insider, March 20th. Soon, I predict, we will have state-to-state hoarding.


"But if our entire nation is going to survive this, we really need to adopt an economy of abundance and cooperation. This is not just true for the West Coast and the Northeast, where the medical providers and local leaders are yelling as loudly as they can about this need.  It’s true in places like Georgia and Florida and Louisiana, as well as every single state in the nation, where the need for this equipment is going to explode over night."


Now for a little humor:


The song "I will Survive" always chases me to YouTube to view this silly video about an alien singing the song. 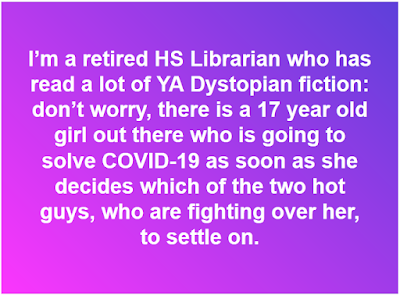 And so we turn again to face one another
And discover those things
We had almost forgotten,
But that, mercifully, are still there:
Love and friendship, not just for those
To whom we are closest, but also for those
Whom we do not know and of whom
Perhaps we have in the past been frightened;
The words brother and sister, powerful still,
Are brought out, dusted down,
Found to be still capable of expressing

Yes there is fear.


Yes there is isolation.


Yes there is panic buying.


Yes there is sickness.


Yes there is even death.


They say that in Wuhan after so many years of noise


You can hear the birds again.


They say that after just a few weeks of quiet


The sky is no longer thick with fumes


But blue and grey and clear.


They say that in the streets of Assisi


People are singing to each other


across the empty squares,


so that those who are alone


may hear the sounds of family around them.

We discover things we had put aside:
Old board games with obscure rules,
Books we had been meaning to read,
Letters we had intended to write,
Things we had thought we might say
But for which we never found the time;

Posted by Anne@HeadFullofBooks at 11:13 AM