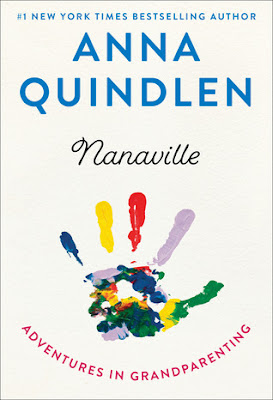 
Sunlight spreads across the checkerboard tiles in the kitchen, and so do many other things: wooden spoons, a rubber frog, Tupperware, a couple of puzzle pieces, some plastic letters, elements of the obstacle course of the active toddler.


We are sitting on the bench by a frog pond. I have been ordered to find and catch a frog, and have been a considerable disappointment. So we are just chatting, frogless, although I continue to keep my  eyes peeled...Did you deliver the frog? Of course, later, when the frog is actually delivered, when Nana snags one and offers it held carefully in her fist, because the last thing she wants to produce is a dead frog, it will develop that Arthur doesn't really want to get up close and personal with it. One part of raising children is discovering the concept of their enormous desire for things it turns out they don't actually want except in theory.

Summary: Anna Quidlen, a favorite author, has become a grandmother and this book is a tribute to her experiences in a new life-role. When her oldest son and daughter-in-law's son, Arthur, is born Quindlen has to navigate a new relationship with her own child and come to terms with the joys and limitations of grandparenting. Where she once led she now has to learn to follow. Using a journal she kept at the time, Quindlen looks back at those experiences now twenty years and now several more grandchildren later.

Review: I've enjoyed everything that Quindlen has written and this book especially spoke to me as a relatively new grandmother. Now in her eighties, Quindlen is writing from a perspective of many years and several grandchildren but she consolidated the story into one, focusing on the lessons she learned at the beginning of her experiences as a grandmother, or Nana. Italicized sections were excerpts from a journal she kept at the time, as the Friday56 quote. I found myself laughing at the examples of times she spent with Arthur which since many could be written about me and Ian. The examples of language problems were especially apt. Sometimes I have no idea what he is emphatically telling me. No matter how many times he says it I still can't understand and find myself saying things like "Is that so? or "That's nice" just to let him know I am listening. Quindlen had the same conversions with her grandson. Arthur settled on calling her Nana. Ian started calling me Nana, too, then shorted my 'name' to Na. His grandfather is Ga. When we are together we are GaNa. Funny, huh? I doubt this book has general appeal but it certainly does to those of us who have had the privilege to be given a new name so late in life.

Book Beginnings on Friday is hosted by Rose City Reader. Share the opening quote from current book.The Friday56 is hosted at Freda's Voice.  Find a quote from page 56 to share.
Visit these two websites to participate. Click on links to read quotes from books other people are reading. It is a great way to make blog friends and to get suggestions for new reading material.
-Anne
Posted by Anne@HeadFullofBooks at 4:20 PM