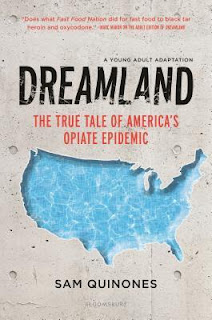 Back in 2015 Sam Quinones published Dreamland and it's revelations shocked the country. In 2019 the book was republished for young adult readers opening up the material to teen readers who desperately need to know the truth about opiate use and addiction. They they also need to know that everyone who says they have the best intentions, aren't always truthful. In this case the officials who were elected to protect them, dropped the ball, and let corporate greed reign for over a decade allowing millions of people to fall victim to the horrors associated with opioid use.

Back in 1929 a blue-collar Ohio city named Portsmouth, built a swimming pool the size of a football field and named it Dreamland. Dreamland was the place where towns folk hung out, where teens met their friends, where people were able to their spend leisure time in a wholesome and friendly way. Years later when manufacturing had abandoned the town and the swimming pool was closed, the only place where people had a chance of seeing a friend was at the local WalMart. The town was a shell of its old self and so, perhaps it is not surprising that Portsmouth, Ohio became the center of the OxyContin epidemic.

OxyContin was touted as a safe pain killer, with a low possibility for addiction. Pharmaceutical companies sent out squadrons of drug reps to meet with doctors to make sure they knew about this new, miraculous drug that could safely eliminate pain for their patients. Doctors who were trained to be careful with narcotics were duped and some, like David Proctor were unscrupulous. He would prescribe OxyContin to his patients after a 3-minute consult as long as they paid cash for the appointment. Soon his patients would stand in line for hours to get their moment with him, to get more drugs. A whole drug mill industry sprung up. When a new, cheaper source of the drugs was identified, entrepreneurs would take advantage, selling some and feeding their own addiction.

Oddly at the same time, runners of black tar heroin from a certain county in Mexico were setting up
businesses in small towns across the US. They were using a new selling model which involved young men from Mexico who would be set up with an apartment and car. They would text a meeting place to users who would jump into the car to make the drug deal, buying a small balloon filled with the heroin. Soon teens addicted to Oxy were switching to heroin because it was cheaper and easier to get. If the driver was arrested and deported back to Mexico, within days he would be replaced. The police felt like they were playing whack-a-mole. When the first fifteen-year-old arrived at the emergency room from a heroin overdose, doctors didn't know how to treat her because heroin addiction was so rare at that time, and not a young person's drug. Not anymore. White teenagers were flocking to use heroin after first getting addicted to OxyContin.

It took years, years before legislators started finally addressing the issues which led to such rampant drug use---the drug mills, the unscrupulous doctors, rehab centers that didn't begin to address the problem. Now Portsmouth is finally turning the page on their recent past and are leading the country in addressing the problems caused by addiction. It is not exactly Dreamland but they are a lot closer than they've been for a long time.

What I liked about the book:
What I didn't like about the book:
I highly recommend this book. If you want more details I'm sure the adult version has more to offer but this version was enough to get my blood really boiling. Every single legislator should be required to read this book before they are elected or re-elected. Every doctor who ever prescribes narcotics should also check out this book first!