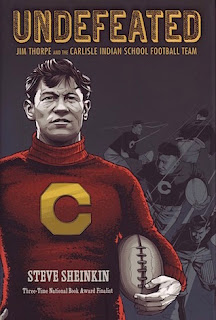 It is possible that Jim Thorpe is the greatest American athlete to ever live. What makes this statement even more remarkable is that many, possibly most, Americans have never heard of him.

Jim Thorpe was an American-Indian from the Sac and Fox Nation, born in 1887. As a young boy he was sent to an Indian school to "kill the Indian in him in order to save the man." Thorpe understandably chaffed in that environment and would run away with regularity. His twin brother, Charlie, didn't mind school the way his brother did and so helped Jim along. But at age nine Charlie died of pneumonia so Jim was left alone and to his own devises. Jim liked anything to do with movement---running, hiking, hunting, riding---but hated sitting and school work. After running away too many times, his father took Jim to the Carlisle Indian School in Pennsylvania because it was far from their home in Oklahoma. When he arrived he was instantly attracted to the game of football.

Football in the early 1900s was not the same game as Americans no today. There was no forward passing, no mid-direction plays, no receivers. Teams could recover their own punts, The scoring was different, and the games were usually refereed by coaches from the home team. It was not uncommon for players to get slugged and knocked-out by members of the opposing team, and it was the rare game where someone didn't break a bone. For these reasons the superintendent of the Carlisle Indian School wanted to ban the sport. In fact, a lot of colleges either did ban football or were just about to ban it, when a group of coaches got together in 1906 and changed the rules of the game and formed what we now know as the NCAA.

Glenn "Pop" Warner played football for Cornell as a student and then spent the rest of his life coaching it. He became the coach at the Carlisle school and in 1903 he had his team use the hidden ball trick where a player actually hid the football in back of his shirt confounding the opponents. In 1907, an undersized Thorpe begged to be allowed on the team and Warner was very impressed with running skills. Eventually Thorpe and Warner would go on to have the most successful football seasons in the country. The team, completely undersized and out-manned, would beat their Goliath opponents because of the creativity of their game calling and because of Thorpe. He could do it all. He could run,block, punt, kick, throw. No one could catch him if he got a bit of space.

In 1912 Thorpe went to the Olympics in Sweden and won both the pentathlon and the decathlon with basically no training whatsoever. He reported that he had no idea, for example, that the javelin was thrown from a running start. Several years later he had his gold medals stripped from him because he had played semi-professional baseball for two summers. The unfairness of this act really smacked of racism since white players from Harvard didn't have their medals taken away though they had also played summer ball.

Years later sports writers were asked who was the best athlete of the first part of the century and Jim Thorpe was the hands-down winner. Babe Ruth was a distant second place winner. Yet we've all heard of Ruth and few of us know much about Thorpe. Why? Is the answer also racist?

Sheinkin, who is one of the best nonfiction writers for young people today, picks topics which highlight our history without whitewashing the bad bits.


Sheinkin has made a career of finding extraordinary stories in American history, researching them exhaustively and recounting them at a nimble pace for readers aged 10 and up. What sets Sheinkin’s work apart is his willingness to tackle horrific chapters in United States history — the creation of the atomic bomb, the Vietnam War — with a candor that is unusually respectful of young readers’ intelligence. His stories center on heroic actors without short-selling the abhorrent circumstances that forced them into heroism in the first place. (NYT Book Reviews)

He certainly opened my eyes to the horrors of the Indian schools which popped up around the country in the late 1800s, the unfair way that Indians were treated in all aspects of society, and oddly, how awful the game of football sounded at its inception.

I think that students ages 12 and up will find lots to like in this book. Even if they don't know about Thorpe, the football may pull them in , but Thorpe's story will captivate them. I am so glad I read this book. It cleared up misconceptions I held about Thorpe prior to reading it. I should add that my husband, who also knew little about Thorpe, enjoyed the parts of the book I read aloud to him because of the football. The play by play of each game makes these games of old come alive.

Will it win a book award this year? It very well may. Sheinkin is not unfamiliar with the award podium, having won the YALSA Nonficiton book award, a finalist for the National Book Award, a winner of the Seibert Medal, and a Newbery finalist for past books, it is possible this book will also be honored with an award, or two. Let's hope so. That way more people will read about Jim Thorpe and his amazing athletic endeavors.