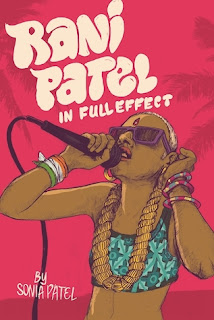 Rani Patel is the only daughter of the only Indian family transplanted to the island of Molokai (Hawaii). She and her mom work like dogs to keep their family businesses going---a small grocery story and a small restaurant---while her father traipses around the island standing up for the water rights of the natives but mostly going out with a much younger woman than her mom. When Rani catches him with this woman she is understandable distraught. She had always thought she was her father's princess and now this? To make matters worse he comes and asks if his mistress can move in with the family. At this last indignity her mom finally gets the nerve she needs to kick him out for good.

Rani's only solace is rap. She loves it and finds strength in her alter-ego, MC Sutra. She also finds friends at school willing to support her in desire to be a good rapper and who are understanding of how bad her home life is. When she is MC Sutra Rani is strong and determined but when she is just Rani she is insecure making bad decisions about men herself. When she is finally ready to embrace the idea that "love" and "hurt" do not go together, she can finally start truly loving herself.

Author Sonia Patel is a psychiatrist who lives in Hawaii. Her work here demonstrates her understanding what it is like being a teenager coping with traumatic life circumstances. She also liked to rap as a teenager and I'm sure she understands the power of poetry to communicate our inner thoughts and feelings.

What I liked best about Rani Patel in Full Effect was the peek at life on an exotic setting. So many people think of Hawaii as paradise, just traveling to the islands for short vacations, hanging out in resort settings without a clear understanding of local politics or problems. On Molokai the problem is water, not enough of it. The natives want to make sure they have water for themselves. The developers want more water to be allotted for the tourist industry. I also enjoyed the peek at the Hawaiian culture which involved use of  Gujarati words and local slang (with a dictionary in the back of the book to help.) Rani is, to some degree, an outsider since her family is from India. In Rani in Full Effect we see how cruel teens can be to one another. This is something we battle in schools everywhere, I'm afraid.

My criticism of the book mainly centers around the author's decision to reveal details of Rani's relationship with her father very early in the book. This did not allow the reader (me) to build up my own suspicions about the circumstances and to build a case against the father myself. This is Sonia Patel's first book and to some degree it showed. Perhaps if there is a second book, and I hope there will be, she will use more sophisticated writing techniques which draw the reader in little by little. That said I know there is a need for more literature coming out of the Pacific islands and I sure hope Sonia Patel has some more stories in her about life on the Hawaiian islands.

Posted by Anne@HeadFullofBooks at 9:56 AM