Black History Month---Black YA Authors and a perplexing question 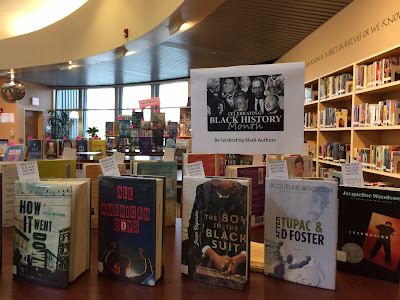 Recently I had an ah-ha moment as I was decorating the library for Black History Month. I decided this year to focus on black authors so I started searching around the library for books. When my display still needed a few more titles, I drew a blank on other names so I consulted Google. The list of black YA authors on Google was laughably short with only seven names and one of the authors listed isn't African-American, her last name is Black. That is when it hit me. Ah-ha! Is searching for an author by race an inherently racist thing to do? If I typed in white authors in Google, I'm sure I would get zero hits. In fact, I just did that and the result was what I expected, zero.

So what is a librarian to do? I want to be sensitive to everyone AND I want to highlight the writing achievements of fabulous black authors. Don't the black students at the school deserve to know there are authors who are writing from experiences more similar to their own? How am I supposed to know who they are without looking them up? My own experience tells me that I don't normally know the race of many author unless that author has won an award like the Coretta Scott King Award which is given to African-American authors or the Pura Belpre Award given to Latino authors. I often don't even know the gender of an author, especially those who go by initials instead of first names.

So, my display is up and I hope it attacks the attention of all readers, not just the African American students. I know I am richer if I take the opportunity to read books written by people of other cultures, the same goes for sub-cultures within the American culture.

I'd sure appreciate some guidance or your thoughts on this issue.

P.S. I did dig deeper and many more names of African American authors. Many I have in my library, others I will look for their books.

Posted by Anne@HeadFullofBooks at 9:28 PM