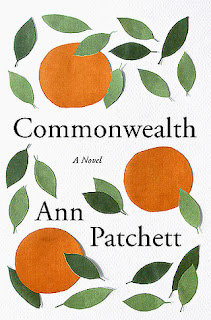 Commonwealth by Ann Pratchett is described by LitLovers as [an] enthralling story of how an unexpected romantic encounter irrevocably changes two families’ lives.

When Bert Cousins shows up at Franny Keating's christening party uninvited and falls for Beverly, Franny's beautiful mother, it sets in motion a break up of two families and the creation of new, blended family. The story, which takes place over five decades, demonstrates how each life was affected by this one chance event.

With ten characters (and a few others sprinkled in for good measure) and a story which is not linear in its delivery, it is confusing to keep track of everyone. I am going to pretend for a minute that I have been asked to write a character map of Commonwealth, because, umm, it needs one. Here goes---

Bert and Beverly divorce their spouses; marry each other; move to Arlington, Virginia.

Every summer the four Cousins children leave their mother in California and live with their father, Beverly, and her two daughters in Virginia. The time that the six children spend together during the summer is one of deep bonding. It solidifies their friendships for life.

Over the next forty-plus years we follow the lives of these ten people and learn their stories, or their versions of the same story. In the end we come to realize that the book is more about stories than it is about the plot. In fact, the reviewer for The Washington Post, Ron Charles, commenting on Patchett's spot-on writing, said, "in another world, she could have been one of our favorite short story writers." He goes on to describe the opening scene, Franny Keating's christening party, as a perfect 32-page short story.

I come from a family of storytellers. Every time we get together we tell versions of our growing up stories. Our children know our stories so well they could tell them as they were their own stories. A few weeks ago I told my daughter about an event from my teen years. She looked at me funny and asked, "Why have I never heard this story before?" It is as if our whole lives are consolidated down into the stories we tell about the past. If we don't tell about some event, it must never have happened.

I started reading Commonwealth thinking it was a book about divorce and the changing trajectory of lives in the wake of it. But what I came to appreciate was the stories told within the book: kids marauding around Virginia in a small gang of six, largely unsupervised; each child's growing up experiences and how they interacted with each other and their parents as adults; and the variations in how the stories were remembered and retold.

Once, not long ago, I complained to my sister how she was always Dad's favorite. The case in point that I used as my example was how he would always drive her to high school when I had to ride my bike. My sister snorted, "He didn't love me best. I just pestered him for rides because I was always late. You rode your bike because you didn't want to be late every day." The stories that we tell ourselves shape who we become and how we feel about our placement in our family of origin.

Franny, easily the easiest to get along with of the six Keating/Cousins children, does the best at staying in touch with everyone as she grows into adulthood. For this reason we are treated to more Franny stories that anyone else but all are represented at some point. At the end of the book, and I hope this isn't a spoiler for you, Franny happens upon a memory she has shared with no one but her step-brother, Albie. When she realizes that this memory is theirs alone she clutches it to herself, glad that she can horde one thing that belongs to no one else but them. For some reason this ending, which I'm guessing many will feel is unfinished, is tremendously satisfying to me.

Galway Kinnell, in his poem "The Promissory Note", talks about the transference of memories to loved ones when we die. I guess one way to reach a form of immortality is to make sure that our memories are tucked safely into the heads of the next generation.

Ann Patchett has spun a wonderful story here in Commonwealth. A story about the power of stories to connect us one to another.