The Age of Innocence by Edith Wharton 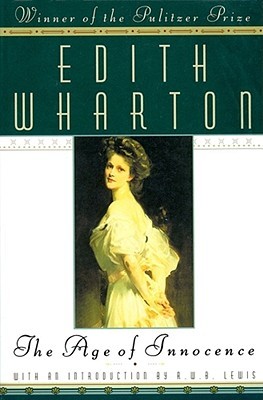 Whenever I read classic literature I question my ability to add anything to the full cadre of information and opinion already available about the novel. This is the case with The Age of Innocence by Edith Wharton. I sit here in front of this blank blog post and the only words which circulate through my head are from Wayne's World, "I'm not worthy." How am I, a lowly person who never even took one English Lit class in college and faked my way through them in high school, qualified to add anything on the discourse in the face of such greatness? Well, I'm not. Instead I shall attempt to pull together a few thoughts and tidbits of information I have gleaned from the tiny bit of research I've done on the book and the author. I hope this will satisfy you, my readers, and encourage you to pick up those classic books which you've always meant to read knowing that you too can at least say something which is interesting and presented in a new way.

First, I selected to read The Age of Innocence to satisfy three reading challenges: Classics Club Spin, the Women's Classic Literature Event, and my own personal challenge to read some of the past Pulitzer Prize winners. I'd long wanted to read something by Wharton, so it seemed like it would be a win, win, win selection and it was.

Secondly, I was very perplexed by the title, The Age of Innocence. As I read the novel I kept wondering at the title and its meaning. Were the 1870s truly an age of innocence, at least in the minds of those who lived it? Did the characters and their stubborn adherence to their own rules of conduct make the appearance of innocence to outsiders? Or was the title relational, comparing the 1870s in New York to 1920s Europe, where Wharton was when she wrote the book? I concluded, in my mind, it was probably some combination of all three. So imagine my surprise when I learned that Wharton titled the book after a famous Reynolds painting entitled, "The Age of Innocence." Ha! Got me.

The setting, old New York in the 1870s, was handled very deftly by Wharton. It was really obvious that she had lived the life she was describing since she knew it so intimately. The rules and snobbery by which the characters lived their lives: who was in and who was out; what to eat and what to wear; where to vacation and what to do while there. Everything was spelled out. One got the impression that Wharton was poking fun at the stupidity of it all without being funny or ironic in the text. Here is a quote from the book which describes a dinner party in which the guests were served Roman punch.


Roman punch made all the difference; not in itself but by its manifold implications--since it signified either canvas-backs or terrapin, two soups, a hot and a cold sweet, full decolletage with short sleeves, and guests of a proportionate importance. (Chapter XXXIII)

Wharton also seemed to poke fun at old New York by giving her characters funny, odd names. There were no Bills or Williams in the bunch. Instead there were characters with unique names like Newland Archer, Manson Mingott, Sillerton Jackson, Emerson Sillerton, Julius Beaufort, and Lemuel Struthers. Not exactly hilarious names but odd enough to make this reader pause and notice.

The Age of Innocence is the story of a love triangle but not in the modern and irritating angle which involves a girl who has to choose from two sexy boys. This story begins with Newland Archer, who is newly engaged to May Welland, meeting May's cousin, the Countess Olenska, for the first time. May represents the best and the worst of old New York, while the Countess appears to embrace the opposite. Archer is attracted to both the old and the new and it just about tears him apart. The lack of sex makes this book more full of passion than ones where the sexual act is explicit. When Newland finally decides to take the plunge, so to speak, his plans are thwarted by the Countess leaving town.

Near the end of the story there is a quote which seems to sum up life in old New York perfectly,


It was the old New York way of taking life “without effusion of blood”: the way of people who dreaded scandal more than disease, who placed decency above courage, and who considered that nothing was more ill-bred than “scenes,” except the behavior of those who gave rise to them.

I can totally relate to the ending where Newland (spoiler alert) decides to go home rather than meet Madam Olenska again after thirty years of separation. We all have our memories of past loves and events associated with that person. Those memories are real to us. I, for one, am not sure if I want to have those memories wrecked by present realities. But readers who crave happy endings will find this finale frustrating.

Apparently Edith Wharton lived in France during or right after WWI and became very disillusioned with the life she had lived before in old New York. She penned The Age of Innocence, her tenth novel, as a reaction to those feelings. It won the Pulitzer Prize in 1921, the first time the prize was awarded to a female author. The prize was awarded amid a controversy where the lead person on the committee ignored the recommendations of the other judges to award the prize to Sinclair Lewis for his classic, Main Street, in favor of Wharton's The Age of Innocence. Since both books have stood up to the test of time, I am glad the award went to Wharton since she was female.

In an effort to know more about the author, I visited the website about Edith Wharton's past estate, The Mount in Massachusetts. It was designed by the author herself. It looks like a very lovely place which clearly shows the author's love of art and symmetry, something I recognized in her writing. After viewing the webpage I have added a visit to The Mount to my bucket list. It will be a long trip from Washington State, though.

In conclusion (this blog post is much longer than I originally thought it would be) I can wholeheartedly recommend The Age of Innocence to my readers. I wasn't as enraptured with the love story as I was with the peek at a by-gone age and era shown us of 1870s New York. It is amazing to think there were people who lived such gorgeous, frivolous lives as the Archers and the Wellands. Read it for that reason alone and you will gain new insights into American history and how people lived (at least some of them) in the past.

Posted by Anne@HeadFullofBooks at 12:22 PM