Today, after a stopover at the GKHS library for a little work boxing up surplus books, Don and I drove south to explore more weird and curious aspects of our state. Today we explored the Mima Mounds, a ghost town, and the Black Houses of Olympia.


1. Mima Mounds
"Mima mounds (sounds like dime-a) were named in 1841, when a vast pimply prairie (the Mima Prairie) was discovered in western Washington during the United States Exploring Expedition. In the centuries since, the source of this strange landscape has defied explanation. A single field may be covered in a million mounds that are several thousand years old, yet no builder has ever been found" (LiveScience.) 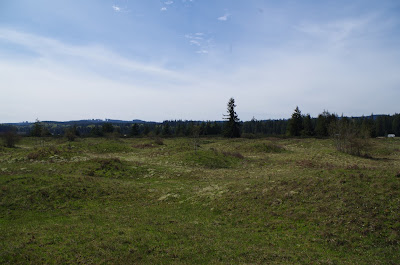 The mounds are four or eight feet high and eight to twelve feet in diameter. What a curiosity. No one knows what caused them and it is a big scientific mystery with lots of ideas what caused the mounds, but no answers.

2. Old Bordeaux, a ghost town
After driving around for a while and then wandering around in a forest near the Capitol Forest we finally found the remains of an old logging town, Bordeaux, which was abandoned over 60 years ago when it was logged out. All that remains is the ruins of the saw mill, a vault from the company store, the smokestack, and the foundation for a steam donkey. Take a look at this website for photos of Bordeaux when the town was a busy spot here. 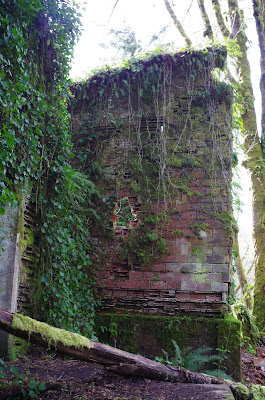 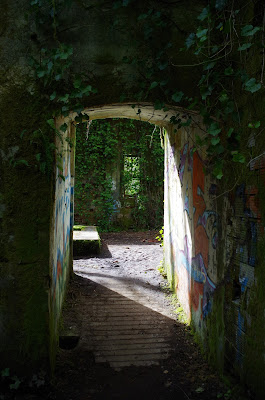 3. The Black Houses of Olympia
"Owned and rented out by a Gothic dentist (and bar/coffee shop owner) named Dr. Duane Moore, the Black Houses of Olympia have become a thing of legend. Supposedly, Moore began painting the houses black in an attempt to drive down property values throughout the city, and some say they form a pentagram when mapped out. Who knows. What we do know is that many of the houses have cryptic names such as the Track House and the Black Womb, and one of them features a mural painted by one of the members of Slayer" (Things to do in Pac NW.)
We don't know if we saw any of the houses with unusual names but we do know that we found several of the black houses as we drove around Olympia. Nearly all of them also had badly overgrown yards, which would also drive down property values. 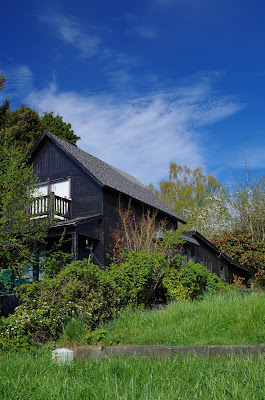 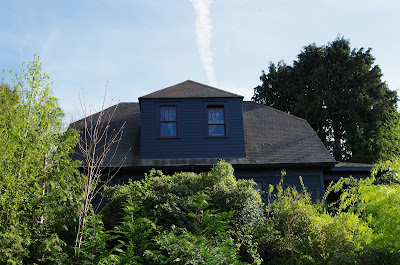 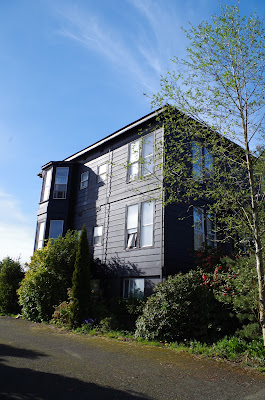 We drove past two other black houses, one was so overgrown we couldn't get a good shot, and the other was black but it had some orange trim, so we didn't think it counted.

Tomorrow we are heading up North again. After dropping Carly off for her flight to her last Grad School interview we will drive up to Skagit County to see TULIPS! (OK, not weird but wonderful.)

Email ThisBlogThis!Share to TwitterShare to FacebookShare to Pinterest
Labels: Staycation 2016