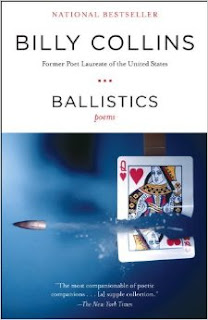 Last week I participated in one of those blog linky activities. The topic was poetry. Participants were asked to identify some of their favorite poems and poets. (See my answers here.) For poets I listed, among others, Billy Collins as one of my favorites. Then I was shocked when other participants said they had never heard of him before. How could have a self-identified poetry lover not heard of Billy Collins, I scoffed.

Billy Collins was identified as "the most popular poet in America" by Bruce Weber of the New York Times. He also served as the U.S. Poet Laureate from 2001-2003. In that role he was asked to write a poem about the events of September 11th when the Twin Towers fell. He delivered it to a combination of both houses of Congress. His poems are witty and accessible for the common man. In fact, Collins describes his own poetry as "suburban, domestic, and middle class." Best of all I can understand the poems when I read them! Ha.

As I was nurturing my snotty "I know about Billy Collins and you don't" attitude, a fleeting thought entered my head, "But Anne, you haven't read any of his poetry books, either." That thought knocked me back a pace or two. It also caused me to stop and analyze how I do know about him and why I like his poetry.  It all started with Poetry Out Loud. As the school coordinator of P.O.L. I often do presentations in English classes about reciting poetry from memory. I always show the following recitation of Billy's poem, "Forgetfulness" by one of the past winners of the National Poetry Out Loud contest, Jackson Hille. It is really obvious that Hille understands the poem he is reciting, which is an important part of the scoring. Take the time to listen. It is a delight.

Students are all very attracted to this poem because it is humorous even though the topic is serious.

The second way I knew about Billy Collins is by the volumes of poetry in my library, in particular two volumes edited by Collins called Poetry 180 and 180 More. These two volumes, crammed full of fun poems, are designed to be the type of poems one would enjoy reading every day. In the Forward from Poetry 180, Billy Collins includes his own poem, "Introduction to Poetry" which is one I recommend each teacher read before they teach a poetry unit. It starts with:
I ask them to take a poem
and hold it up to the light
like a color slide
Collins, the poet, shares what he hopes with his poems...
I want them to waterski
across the surface of a poem...
but it ends with these lines, which is clearly not a good thing...
They begin beating it with a hose
to find out what it really means.

Just this past week, I learned that Billy Collins will be in Tacoma on this Friday night, April 22nd. Woot. Woot. Guess who will be there dragging her daughter along for company? Right-o. Me!

(Click on this link for the Broadway Center for details about the program.)

But it was not until I learned about the program that I finally decided to read one of his poetry volumes. I am currently 3/4th of the way through Ballistics: Poems published in 2008. I've been marking up the slim volume with post-it notes because I want to go back and reread or share these poems with others. For example, last night I read "Greek and Roman Statuary" to my daughter. When we traveled in Italy a few years ago we noticed how many statues are missing body parts. Collins must have noticed the same thing since this poem begins with these funny lines:
The tip of the nose seemed the first to be lost,
then the arms and legs,
and later the stone penis if such a thing were featured.

We all had a good laugh over this one, though my daughter, who took an art history class, reminded us the penis removal was done on purpose.

In the poem from which the book is entitled, "Ballistics", Collins muses over about a photograph of a bullet passing through a book. Instead of admiring the photograph he starts thinking about the book, wondering what book was destroyed for the shot. He decides it was "a recent collection of poems written/by someone of whom I am not fond/and that the bullet must have passed through/his writing with little resistance." Ha! What a funny and fun poem. I, too, would be worried about the book.

In the poem "The Poems of Others" he confesses he can't get the poems written by others out of his head. Me, too! I am constantly walking around trying to figure out the actual words of favorite poems, or just repeating to myself favorite phrases. This is what I love about poetry---when I find myself in the poems.

Collins doesn't just connect with me, he attempts to draw in all his readers. He describes himself as "reader conscious....I have one reader in mind, someone who is in the room with me, and who I'm talking to..." (Poetry Foundation). Perhaps this is why I consider Collins one of my favorite poets. It is as if he and I are sitting in the kitchen and just talking to each other.

I am enjoying this volume of Collins' poems very much. I encourage you to do a bit of investigation of his poems, too. (Click the link above Ballistics to see a YouTube video of Billy reading the poem to a Poetry Club.)

Posted by Anne@HeadFullofBooks at 1:36 PM