Because my husband and I are stuck at home this year for Spring Break we decided to take a series of day trips to investigate the weird curiosities Western Washington has to offer. Yesterday we mapped out a full day of adventures which took us north of our home in Puyallup.


First stop, Greenwood Memorial Park in Renton to see
the final resting place of Jimi Hendrix
At this point I cued up my phone to play music appropriate for the day on Pandora Radio.
First song: Voodoo Child by Jimi Hendrix

Next stop: Fremont area of Seattle, via the I-90 floating bridge.
Rocket

Fremont Troll, under the Aurora Bridge 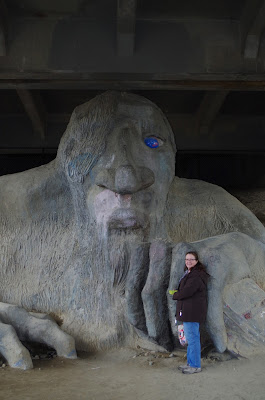 Since we were walking around to see the sights in Fremont we didn't have any theme music playing.

Next stop: The Panama Hotel
Made famous by the book, On the Corner of Bitter and Sweet by Jamie Ford.
The Panama Hotel still houses items left behind by families who were rounded up in the Japanese Internment following the bombing of Pearl Harbor in WWII. We drank a pot of tea and ate shortbread and sesame seed cookies while listening to music of the era on 78 speed records, played on an old record player. 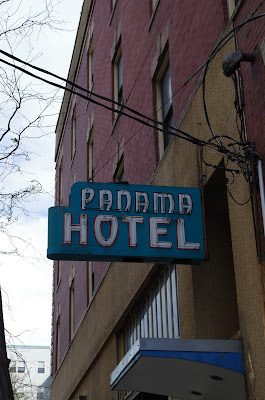 Back in the car. Cue the music to the 1940s big band sound. First song, "In the Mood" by Glen Miller.

Last stop: The Hat and Boots, now located in Oxbow Park in south Seattle (moved here in 2003.) They were once part of a gas station and an obvious roadside attraction. The hat was the office and boots were the restrooms. 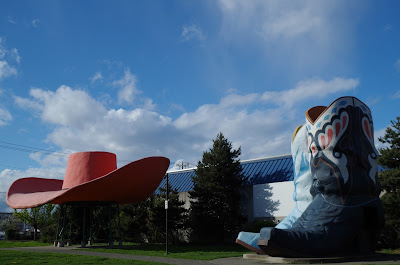 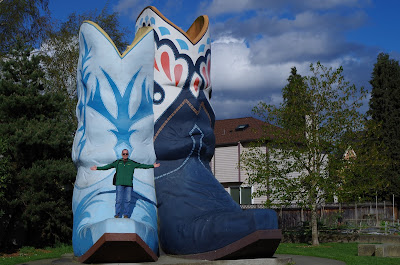 The weather held most of the day only sprinkling on us for a few minutes at the Troll. Here, our last stop of the day, the sun broke through the clouds and we had a glorious few minutes alone in the small neighborhood park with a huge hat and pair of boots.

On our way home we listened to Western Swing music. First song, "Bob Wills is Still the King" by Asleep at the Wheel. Plenty of slide guitar and fiddling to fill the car as we drove home.

Email ThisBlogThis!Share to TwitterShare to FacebookShare to Pinterest
Labels: Staycation 2016