Short Reviews: Shadowshaper, The Hired Girl, The Rest of Us Just Live Here

I am still reading reading YA books with an eye toward the Printz Award. These three books all have potential. 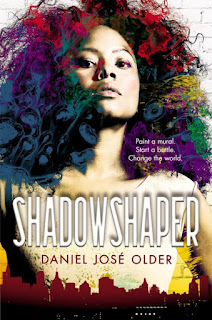 Shadowshaper by Daniel Jose Older is an urban fantasy set in Brooklyn. Someone described it as Cassandra Clare (The Mortal Instruments series) meets the Caribbean. Sierra Santiago, who loves art and creating murals, is encouraged to create a mural on an abandoned eye-sore of a building and asked to do it as fast as she can. In fact, She asks another graffiti artist, Robbie, to help her fill up the wall. There is something odd and urgent about the project. Odd in that Sierra notices that one of the drawings in a nearby mural is crying real tears and urgent because it seems that all the murals around them are fading.  Then to add more tension to the situation, which Robbie and Sierra take a bit of time off from their mural creation to attend a party, they are attacked by this zombie-type man. What is going on? Sierra soon learns about a supernatural order called Shadowshapers who connect with spirits through art, music, and stories. Something or someone is killing off all the Shadowshapers and it is up to Sierra and her friends to find out who it is before they are all gone.

Review: Is this book Printz-worthy? I am not sure, but the plot is just unique enough with the mixture of urban fantasy and Caribbean mysticism it should be mentioned in any Printz discussions. This book was identified by Publisher's Weekly as one of the top fifteen best YA books of the year. We have included this book on the Bethel School District Mock Printz list. 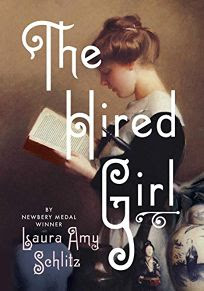 The Hired Girl by Laura Amy Schlitz is set in 1911 in Baltimore. Joan, who runs away from home, a
family farm in Pennsylvania, because her cruel father will not allow her an education she desperately wants. She ends up as a maid to a rich Jewish family telling them she is eighteen, not her actual age of fourteen. In the book she explores themes of religion, loyalty, and education.

Review: I was quite captivated by the book at first. It is written in journal-style so the reader learns about Joan as she doles of the information. Joan is impulsive and immature, like most fourteen-year-olds, but it seems odd because she is pretending to be eighteen. The family she lives with keep asking her about her age because they don't quite believe she is as old as she says. The book is long, over 400 pages, and it really drags in the middle. Some reviewers have mentioned pacing issues---lots of action followed by chapters of fairly tedious details. Other reviewers have mentioned how the story seems to assume that Christianity is preferred religion and the Jewish faith is viewed as the odd one. I didn't get that feeling as I was reading it but once I read that review I could understand the reviewers point of view. Other bloggers are mentioning this book as a possible Newbery candidate. With the protagonist being fourteen that would place The Hired Girl at the top of Newbery interest area and near the bottom of the Printz age limit. I'm guessing the committees for both awards will take a look at this book. I liked the book but have reservations if it is really Printz-worthy. This book is also highlighted by Publisher's Weekly as one of the top fifteen YA books of the year. 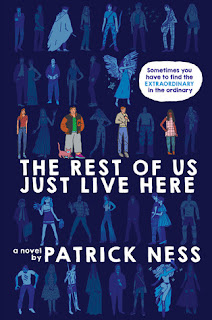 The Rest of Us Just Live Here by Patrick Ness could be described as realism with a bit of paranormal activity thrown in for good measure. The Rest of Us is set somewhere nearby here in Western Washington. It is set in a town an hour away from a big town which is an hour away from an even bigger city, and it references a big mountain. That narrows it down to somewhere in south or east Pierce County, where we live (Puyallup/Graham) or my daughter lives (Eatonville.) I spent the whole book trying to figure out exactly where the characters lived, even though I am sure it was really just a made-up place, it seemed tantalizingly close to here. Mike, his sister Mel, friend Jared, and his potential girlfriend, Henna, are just weeks away from graduation from high school. They want this time to be the best ever because soon they will all be scattering as they go off to college. Unfortunately, paranormal activity is kicking up again with the Indy kids. What will it be this time? Vampires, zombies, or gods? Whatever it is, the creepy blue lights keep showing up and Indy kids keep dying. Mike and his friends just hope they can make it to graduation without their school getting blown up.

Review: I am a big Patrick Ness fan. I simply adored his Chaos Walking series and found his book A Monster Calls quite compelling. With The Rest of Us Just Live Here I think Ness, to some degree, is poking fun at all paranormal novels. In these novels adults never seem to see what is going on right under their noses, leaving only astute teens to battle the monsters alone, in this case Immortals. Oddly, these teens, since they have no adults to talk to about all the odd paranormal activity, must go through at least the patina of normal activities in their daily lives. Adults seem to lose the ability to believe in magic and therefore cannot see magical things happening right under their noses. All of this is a fairly clever premise but I thought the execution was weak. Mike and his friends seem overly concerned about their relationships with each other, causing all kinds of problems and hurt feeling. Paranormal activity is disconcerting but almost easy to dismiss. I never knew quite what to focus on and who or what I suppose to care about. My favorite bits of the book were the chapter headings which had long rambling descriptions of what the Indy kids were doing to fight off the Immortals. This book is not Printz-worthy material in my opinion, even though there is a god of cats in it.

Have you read any YA books this year you think should be considered for the Printz Award?

Posted by Anne@HeadFullofBooks at 10:45 AM