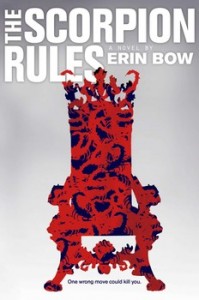 “We may be likened to two scorpions in a bottle, each capable of killing the other, but only at the risk of his own life.” ―Robert Oppenheimer, father of the atomic bomb


Epigraph for the Scorpion Rules, setting the stage for the theme.


Finally a Sci-Fi/Fantasy book I can get behind for the Printz Award. I didn't expect to like this book as much as I did. Let me explain.

Scorpion Rules by Erin Bow is a dystopian tale but not in the high action, intensity of a Hunger Games or a Maze Runner. If anything the book is a bit sedate and calm, at least the first half is that way.


In the future, the UN has brought back an ancient way to keep the peace. The children of world leaders are held hostage—if a war begins, they pay with their lives. Greta is the Crown Princess of the Pan Polar Confederacy, a superpower formed of modern-day Canada. She is also a Child of Peace, a hostage held by the de facto ruler of the world, the great Artificial Intelligence, Talis. The hostages are Talis's strategy to keep the peace: if her country enters a war, Greta dies. The system has worked for centuries. Parents don't want to see their children murdered. -The publisher

Greta has know for years that her live hangs on a very thin wire. When a new hostage/Child of Peace, Elian, arrives at the Precepture School, where the hostage children are all sequestered in quiet Saskatchewan, suddenly and dramatically the quiet life shifts. Elian is from a neighboring confederacy to Greta. If war breaks out between the two confederacies then both children will be killed. And war seems likely. Suddenly the quiet, low-octane book gets a turbo shot and the action heats up.


Bow's writing never falters, from the vivid descriptions of the Precepture goats to the ways in which her characters must grapple with impossible decisions, and she is equally at home with violence and first kisses. Slyly humorous, starkly thought-provoking, passionate, and compassionate--and impeccably written to boot: not to be missed. ---Kirkus Reviews.

I understand the book will have a sequel which in my mind is a deterrent for it to be a potential award winner, but none-the-less I decided to add this book as a late entrant to our 2016 Mock Printz list. I ordered two copies and hope to get it in student's hands soon.