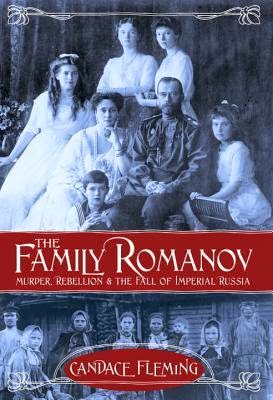 The Family Romanov by Candace Fleming is a book with a fabulous subtitle: Murder, Rebellion, and the Fall of Imperial Russia. The above quote, from the Wall Street Journal review pretty much sums up the last days of Czar Nicholas II, blithely playing cards and dominoes while his country was falling apart.


Here is the riveting story of the Russian Revolution as it unfolded. When Russia’s last tsar, Nicholas II, inherited the throne in 1894, he was unprepared to do so. With their four daughters (including Anastasia) and only son, a hemophiliac, Nicholas and his reclusive wife, Alexandra, buried their heads in the sand, living a life of opulence as World War I raged outside their door and political unrest grew.  Deftly maneuvering between the lives of the Romanovs and the plight of Russia’s peasants—and their eventual uprising—Fleming offers up a fascinating portrait, complete with inserts featuring period photographs and compelling primary-source material that brings it all to life. History doesn't get more interesting than the story of the Romanovs.- Candace Fleming

As a young teen I was captivated by the story of Czar Nicholas II of Russia, his family, and how they were killed in cold blood. I was fascinated by the very creepy Rasputin. And I wondered if Anastasia was still alive and actually kept my fingers crossed that she was. That was the depth of my knowledge about the Romanov family and condition of peasants in Russia prior to the revolution.

Now, finally, a book has been written about the last Czar of Russia that is perfect for high school students. The Family Romanov: Murder, Rebellion, and the Fall of Imperial Russia is not too easy and childish for teen readers, nor is it overly long and tedious. It gives lots of information without over-simplifying or overwhelming the reader. Fleming, known as a scholarly yet engaging nonfiction writer, makes great use of primary documents---diaries, letters, telegrams, eye-witness accounts. The book fairly crackles with authority while remaining accessible.

Every year I try to find the perfect nonfiction book for high school students who honestly will not read adult nonfiction but get turned off on the more childish junior books which are full of sidebar columns, and disjointed artifacts on each page. The Family Romanov is just the book I've been looking for and I predict that students fascinated with Russian history, like I was as a teenager, will find it worth their time. And they will learn a lot if they read it including the proof that Anastasia was definitely killed along with her family.

We are including The Family Romanov in our cadre of books for our 2015 Mock Printz for the above reasons and more. It has a plethora of starred reviews and just plain great reviews like this one from the Washington Post:


Candace Fleming’s latest book has the elements of an overheated dystopian thriller —political repression, malevolent figures, a protracted war, endangered children— but no prospect of a triumphal ending. Focusing on the last czar and his family, Fleming, who has also written books about Amelia Earhart and the Lincolns, delivers another engaging and insightful work of history, giving young readers a clear sense of the complicated world in which the Romanov family lived and died. She presents imperial Russia as full of problematic extremes, and Nicholas II as a leader incapable of handling them.

The only thing I disagree with in this review is the mention of young readers. Yes, there may be young readers who will be able to read this book but I think it is better suited for the teen readers, or for adults who like to read their history in accessible formats. Either way, just read it. I guarantee you will learn something and unlearn a few things you thought you knew but had wrong all these years.

Posted by Anne@HeadFullofBooks at 4:42 PM