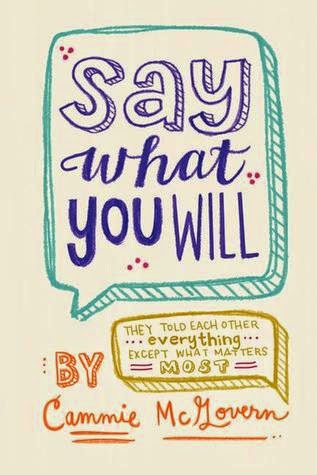 On my Mock Printz  roll-out event yesterday I described Say What You Will by Cammie McGovern as a "romance" which is only partially true. It does have a romantic aspect but it is SO much more than that. Let me attempt to explain what I mean.

Characters: Matthew and Amy, both are seniors in high school.
Amy is a beautiful, intelligent girl who has cerebral palsy. She can only speak with the help of a talking computer and needs assistance with things that most teens take for granted like getting from class to class and eating. Yet her brains, especially her writing abilities, have brought her a sense of notoriety in school.
Matthew is a loner who has found himself in a world given over more and more to his compulsions. At this point it is not diagnosed as OCD yet. He worries about everything and tries to figure out how he is going to navigate through his day without drawing attention to himself. Oddly and out of character for Matthew, it is a comment that he makes in class that causes an interaction with Amy for the first time.

Normal/Unusual teenagers: both Matthew and Amy just want to be normal teens but their disabilities handcuff them to a degree.
Amy wants to make friends yet recognizes the adult assistant assigned to help her at school are barriers to this goal. What if she has student assistants help her navigate through the school day rather than adults?
Matthew is also lonely yet fascinated by Amy. He is secretly pleased to be selected as one of her student helpers. Will he be able to hide his obsessions from her and her parents?

The Plot: on the surface it appears that the book will unfold like most romances. Boy meets girl. Boy woos girl. Girl challenges boy to find his better self. Love ensues.
The first half of the book appears to follow the above pattern. When the senior prom happens near mid-book it became obvious this book will now veer off the pattern into uncharted territory. The plot twist kept me reading and interested.

The author: Say What You Will is author Cammie McGovern's debut YA novel. As a mother of a child with autism she understands more than most the challenges faced by children living with disabilities. In an interview with USA Today she says


As the parent of a 17-year-old son with autism, I know all too well about loneliness and isolation for kids with disabilities. As is often the case with kids on the autism spectrum, his communication may be halting and awkward, but he is, at heart, a social creature who delights in activities and the company of others. The best thing I did in the lonely, hard years after Ethan was first diagnosed was connect with a group of mothers of kids with disabilities and start an organization called Whole Children.

Her experiences with her own son and with children she met through the Whole Children organization must have really helped her understand teens. The language and the situations in the book are quite credible and authentic.

Mock Printz selection: because of the above reasons we selected Say What You Will to be on our Mock Printz list of books this year. I will be interested to see how teens react to it. If yesterday is any indication, the reaction of teens to it will be favorable. The cover flap, which mentions John Green, will be reason enough for many teens to read it, "John Green's The Fault in Our Stars meets Rainbow Rowell's Eleanor & Park in this beautifully written, incredibly honest, and emotionally poignant novel." I don't know if I would go so far as to compare this book to those two mega-wonderful books but I do like it.

Read it yourself and let me know what you think. Say What You Will---it's good.

Posted by Anne@HeadFullofBooks at 9:23 AM