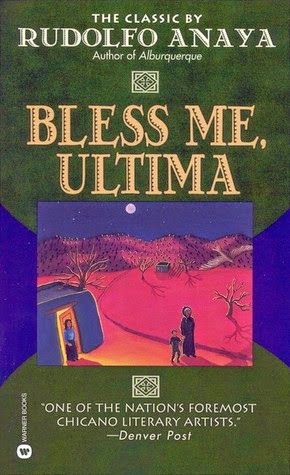 During Banned Books Week each September the Office of Intellectual Freedom announces the top ten most frequently banned or challenged books for the previous year. Bless Me, Ultima by Rudolfo Anaya made that list for 2013 which is completely shocking since the book was first published in 1972. It is hard to believe that anyone is still making a fuss over a book published more than forty years ago.

I selected Bless Me, Ultima as my banned book read for the year in part because of its inclusion on the list mentioned above, but mainly because of a personal experience that indirectly involved me. Several years ago an English teacher at my school assigned Bless Me, Ultima to her class of Honors students. She was a tough grader and it seemed that everything she assigned drew the ire and scrutiny of parents. I can still see in my memory the long queue of parents lined up to speak to her during back-to-school night. While most teachers had two or three parents in their lines, she had fifteen or twenty. It seemed that everyone was mad at her for something. The next day, an administrator asked if I'd ever read Bless Me, Ultima. District officials were considering pulling the book from the curriculum because of all the complaints and they wanted my opinion. Of course, I was opposed to any such action. I hadn't read the book so I had to do a little research before making a recommendation. The district ultimately decided we would stick with the book but would allow alternative books for students whose parents had objections. That's unfortunate because few books do such an amazing job of highlighting positive aspects of Hispanic culture in the U.S. Bless Me, Ultima is also a remarkable coming-of-age tale. It offers so much to contemplate, to chew over, to learn from. This is a perfect book to teach because it would generate great class discussions.

Author Rudolfo Anaya grew up in a small town in New Mexico. Bless Me, Ultima was his first novel. Anaya said he grew up listening to the magical stories told by the old people in his community. In Bless Me, Ultima the young narrator, Antonio (Tony) tells of:


"his experiences with his friends and family, his schooling, and his special friendship with Ultima, a curandera (curer) who comes to live with his family. Anaya weaves myths and legend into his tale of family life and follows Antonio's spiritual quest to reconcile the existence of evil with God. Antonio learns of the existence of other gods and forces such as sorcery. It also contains expletives (mostly in Spanish), but it reflects the pride and dignity of Chicano life. (Foerstel 228).

Antonio is a very introspective and thoughtful child who has deeply disturbing experiences at a young age, such as witnessing a man's death. With Ultima's help he learns he can gain strength even from negative experiences and that good is always stronger than evil...messages all of us need to hear.

What a pity that some parents try to "protect" their children from reading this book. Young Antonio has questions about his faith and God and he has an adult, Ultima, with whom he can discuss his concerns. Don't all children have questions of a spiritual nature? This book could provide a launching pad for great family discussions. Parents erroneously think that by preventing their children from reading information different from what they believe, children won't question their faith. More likely, children will go out and find answers to their questions elsewhere just as Antonio did when he explored the myth of the golden carp. Censorship has the exact opposite effect of what parents want.

Bless Me, Ultima catapulted itself onto my top twenty all-time favorite books. The language is so rich and evokes such beauty in my mind. I highly recommend that everyone, both young and old, read it.


“I made strength from everything that had happened to me, so that in the end even the final tragedy could not defeat me. And that is what Ultima tried to teach me, that the tragic consequences of life can be overcome by the magical strength that resides in the human heart." --Antonio in Bless Me, Ultima

One more thing:  I listened to the audiobook of Bless Me, Ultima. Listening to Robert Ramirez, the voice actor, enhanced my reading experience because of his marvelous work. (Recorded Books, 1994).