Let's talk about Forgive Me, Leonard Peacock and banned books at the same time 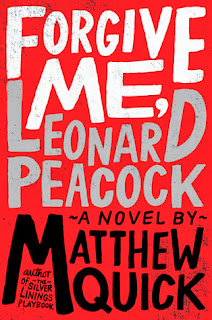 Forgive Me, Leonard Peacock by Matthew Quick is the story of a very disturbed young man who wants to spend the last day of his life giving gifts to four people who were nice to him. He wants to thank them and let them know that it is not their fault that he needed to commit suicide, that he needed to end his pain. All four of the people are suspicious that something is wrong, but one, his Holocaust Education teacher, actually reaches out and gives Leonard a life-line. Will he take it?

The book, which is heart-wrenching to read, covers a very, very difficult topic: teen suicide. It is a topic most people only want to talk about in generalities. When specifics come up we want to sweep them under the table. Leonard was in pain emotionally for years yet his peers, teachers, parents, and counselors all missed the signs that he was in trouble until it was almost too late. They allowed him to isolate himself, even making him the scapegoat for all their bullying and bad behavior, piling more pain and humiliation on top of everything else. When he finally gets to the point of putting together a suicide plan it almost seems like the logical next step to end his miserable life.

As a teacher I have counseled a student who was contemplating ending her own life. It was very scary for me and painful for her. I had support from counselors at my school and we eventually got the parents involved and she got the help she needed. It was hard and scary. I didn't know if I was doing the right thing but I wanted to do something. Who knows, maybe I helped save the girls life. That is not the point. I did something because I had a bit of training and I was in the right place at the right time and I took her problems seriously. Are there more Leonard Peacocks out there who need someone to talk to them, to help them? I know there are. Perhaps that person, teen or adult, would feel more empowered to help if they had read this book first.

But here is the rub. This is exactly the type of book that gets banned or challenged in schools today. It is an important book on a tough topic and it doesn't mince words. I'm guessing that some would-be challengers would say that this book could give kids ideas to commit suicide so it should be removed from the shelves to protect children. But if they say this, they missed the point. Leonard was so sad that he considered ending his life but along the way he runs into a teacher who knows the signs and tries to help. This is a very important book that needs wide distribution for that very point...to highlights symptoms and makes it clear that we have got to help when we recognize them. Instead of giving kids ideas about suicide it empowers would-be helpers to act and act now!

This is a very important book and should not be missed by anyone who works with teens,  is friends with teens, or is a teen.

Posted by Anne@HeadFullofBooks at 8:39 PM