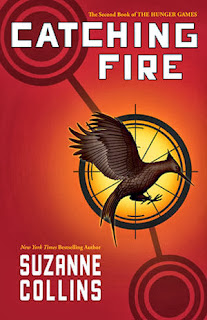 Of all the books I have in my library I've received more complaints by parents about The Hunger Games than anything else. This surprises me every time, since I love the book so much. The complaints usually center around this general idea, "I don't want my kid reading a book about teens killing teens." Obviously the person lodging the complaint hasn't read the book/series or they would know that the whole premise of the story is how very sick a society that forces young people to fight to the death for entertainment. In 2011 The Hunger Games trilogy books were third on the list of challenged or banned books in America as reported by the Office for Intellectual Freedom. The reasons: anti-ethnic; anti-family; insensitivity; offensive language; occult/satanic; violence. These reasons don't even sound like they match the books at all.

In honor of Banned Books Week and the delightful Hunger Games trilogy making the top ten list of challenged books, I am rereading Catching Fire, the second book in the series. More precisely I am relistening to it in the audiobook format. I am enjoying it just as much as the first time I read it several years ago. I had forgotten so many details and specifics that it feels fresh and new to me.

Pick up a banned book this week for a first or second time and refresh your memory of how much you really liked this book in the first place.

Here are a few I recommend, all from the top ten banned/challenged book list of 2012:
-The Absolutely True Diary of a Part-time Indian by Sherman Alexie
-Looking for Alaska by John Green
-Thirteen Reasons Why by Jay Asher
-The Kite Runner by Khaled Hosseini
-Beloved by Toni Morrison
-Glass Castle by Jeannette Walls 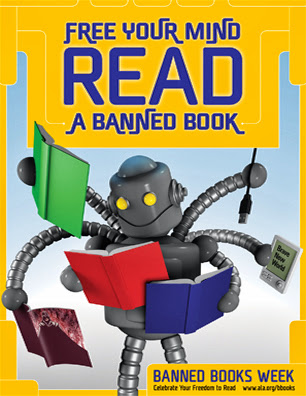 Posted by Anne@HeadFullofBooks at 11:04 PM