Review: The Diviners by Libba Bray

A reading funk plagued me the whole month of September. When my reading mojo finally returned in October I was able to finish a pile of books but enthusiasm for blogging didn't return at the same time. Of the sixteen books I read only four reviews found their way into print here. Sigh.

In an attempt to remedy this situation I've decided to write several short reviews of those past books and to stay current on my reviews for this month.  Don't look for anything fancy but I'll do my best to give you my honest and candid impressions in a briefer than normal format. 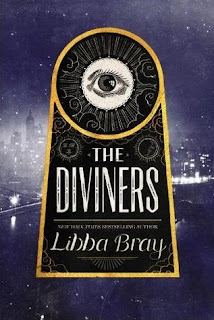 Libba Bray's new novel, The Diviners, is a supernatural thriller set in New York City during the Jazz Age. Its main character, Evie O'Neil, is a plucky flapper who is both brave and brash. She is "gifted" with psychic abilities that come in handy to help track the evil Naughty John who terrorizes the city with his ceremonial murders. In addition to Evie there is a whole cast of characters and their stories are told expertly by Ms. Bray in third-person narratives that bring them and the 1920s setting into clear focus. There are Memphis and Isaiah, African-American brothers living in Harlem, both also have special "gifts". Uncle Will, who runs the Museum of  American Folkfore, Superstition, and Occult and his assistant, Jericho.  Both men harbor deep and possibly disturbing secrets.  There are several other interesting characters. One I found especially charming was Sam, who reminded me of Dicken's Artful Dodger. Everywhere the characters turn evil lurks and it is obvious that something very sinister is afoot.

This is the first audiobook I listened to on my iPod Touch. It was expertly performed by January LaVoy. She handled the cast of characters with ease and brought the Jazz-age lingo to life. Because I don't usually read the thriller/horror genre, I found myself on the edge of seat quite often.  I even had to turn off the iPod a few times to allow my heart to settle down. My only criticism, which won't be a bad thing for most people, is the book is very obviously the first book in a series.  The last chapter sets us up for more spine-tingling situations in book two and beyond.

Do I recommend The Diviners? Ab-so-toot-ly!

*This book is a Mock Printz selection for GKHS, my school.

Posted by Anne@HeadFullofBooks at 11:02 AM