BOMB: the Race to Build-and Steal- the World's Most Dangerous Weapon by Steve Sheinkin 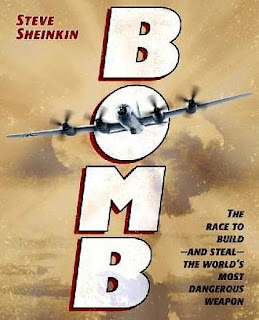 "In the end, this is a difficult story to sum up. The making of the atomic bomb is one of history's most amazing examples of teamwork and genius and poise under pressure. But it's also the story of how humans created a weapon capable of wiping our species off the planet. It's a story with no end in sight. And like it or not, you're in it." -p.236

These are all words (names) I knew a bit about prior to reading this book.  But here are some that were new to me---

All the disparate pieces of information I had in my brain about the Atom Bomb came together through the reading of this book.  I had never before drawn the line between all the spy work done during World War II by the KGB, the creation of the Atom Bomb, and the Red Scare of the 1950s. Now I see how all of this is connected.

I found the book, written for young adults, to be both fascinating and terrifying. My whole life has been lived in the shadow of this bomb and the terrible consequences it can evoke on mankind. I remember as a child in elementary school practicing Air Raid drills. We would all jump under our desks as if those flimsy things would protect us from the melting heat, and earth flattening power of these huge bombs. How naive and stupid we were.

All of the men who were involved in the Manhattan Project later questioned if they had done a good thing. Oppenheimer himself tried to talk President Truman out of developing an even bigger bomb than the one he created to no avail.

Now with Iran threatening the fragile situation in the middle East with their nuclear aspiration, I am reminded again of how awesome and awful the inventions of man can be.

Posted by Anne@HeadFullofBooks at 1:02 PM