Review: The Difference Between You and Me by Madeleine George 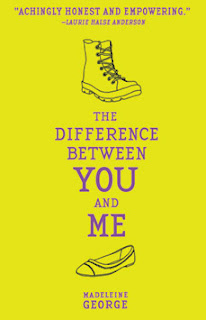 Emily and Jesse are an unlikely couple.  Jesse, a social misfit at school has been out of the closet since she was fourteen, is the daughter of supportive, politically activist parents. Emily is a popular student who is active in student government. She has a boyfriend who is also popular and on the football team. Despite the vast differences, the girls start a passionate relationship which involves meeting together in a weekly tryst in the lavatory of the public library. The rest of the time Emily ignores and is almost rude to Jesse at school. When a huge chain store tries to move in to town and use the high school as a launching spot for its PR program, Jesse and Emily end up on opposite sides of the issue. As Jesse tries to make sense of the inconsistencies of her life she meets Esther, a teenage political activist who admires Joan of Arc. Jesse's new friendship with Esther gives Jesse the courage to become politically active herself.

Though The Difference Between You and Me by Madeleine George is touted as a LGBT romance, I didn't think that the was the strongest part of the story-line  It was hard to like Emily who was so concerned with her reputation that she seemed to be completely selfish throughout the story. Jesse's evolution from obsession to acceptance seemed much more authentic and realistic. As Jesse focused on her relationship with Emily she let another friendship slip. She had to confront this as she moved toward personal acceptance. This was the part of the book that I felt had the strongest message to teens---we need to be true to ourselves and to embrace and treasure our friends along the way.

The book is written in alternating chapters between Emily, Jesse, and occasionally Esther. Even though the book is really about Jesse her chapters are written in third-person while Emily and Esther's chapters are in first-person. It was very odd. Every time we switched narrators I thought about how odd it was. I don't think that is what the author hoped that the reader would think about when she chose this literary technique.

This book is on our Mock Printz list. We selected it because it received three starred reviews from Kirkus Reviews, School Library Journal, and Publishers Weekly. Now that I've read the book, I disagree with those reviewers.  Though I liked the book, it really isn't that special, especially not special enough to be considered for the Printz Award. I will leave it on my list, however, because I do think it has literary value and I hope a wide variety of students read it.

Posted by Anne@HeadFullofBooks at 11:42 AM