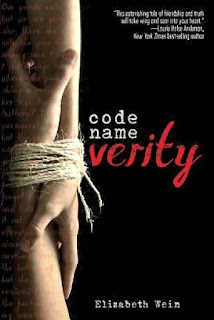 Sandy WB, one of my friends and a librarian at another high school in my same district, repeatedly encouraged me to read the book Code Name Verity by Elizabeth Wein. Prior to her encouragements I hadn't heard anything about the book. For this reason I asked Sandy to join in this blog post in an interview format. I am the questioner, Sandy's responses are given in green. My reply is at the end in pink.

1. How did you first hear about the book Code Name Verity?  What made you decide to pick it up?

The first buzz about Code Named Verity came from GoodReads Mock Printz blog. It looked interesting and since I love historical fiction and it involved a female pilot during WWII, I was intrigued. I was impatient to read it, so it is the first book for which I've read a pre-published galley.

2. Code Name Verity has earned five starred reviews, from professional reviewers. It is really rare for a book to earn so many. Do you agree that this book deserves as much praise as it has earned? Please explain.

Yes, I am stingy with five star ratings too. It interweaves the daily life of British citizens during WWII and it also integrates the friendship of two young women brought together by the war. These are strong, brave women who risk their lives to serve their country, yet the unorthodox friendship grows. So many books have been written from the perspective of victims, but these young women were out there doing their part.

3. As you know, Code Name Verity was a slow-starter for me. What was your reading experience with the book?

Perhaps its greatest flaw is its slow start. Wein spends a great deal of time setting the story and developing characters. Later in the novel, you see the importance of doing so. Invest the time and take time to note details since they develop into crucial plot development and twists later.

4. When I read historical fiction I want to learn something new. Did you learn anything new as you read Code Name Verity?

I have read a great deal of non-fiction and fiction about WWII ranging from personal accounts of American soldiers to Holocaust victims. However, I knew nothing about the contributions of British females in the resistance movement, so yes, I did learn a great deal.

5. Without giving away any spoilers, were there any parts of the books that shocked or delighted you?

Although the intent of historical fiction is to teach something of historical value, I really appreciated the bravery and strength of the individual girls and the added strength their friendship gave them. Wein's extensive research regarding the time period and its amazing flying machines was impressive.

6. We are considering Code Name Verity as a selection for our Mock Printz Workshops in our schools this fall. Why do you think we should select it for this purpose?
Despite the two major characters being female. I believe that Code Named Verity offers enough action and depth to appeal to both male and female audience. War is never easy to read about and this novel treats it honestly.

7. I haven't read anything else by Elizabeth Wein, though I really liked her writing style, have you?

This is the first book I've read by Elizabeth Wein, but I checked and noticed that she has written some YA fantasy which is another favorite genre of mine. I am planning to read The Winter Prince, but the cover does not entice me.

8. Is there anything else you'd like my readers to know about Code Name Verity that might encourage them to pick it up, too?

Give it a chance. It has earned a spot in my top fifty books for my high school library.

Thanks Sandy for joining me today at Headfullofbooks.

As I said earlier I wasn't sure in the beginning if I was even going to make it past page 25 but with your encouragement I read to page 50 and then couldn't stop.

I, too, knew nothing about the women who flew planes in the WWII war effort for Britain and those who participated in other resistance type activities.  I often wonder if people today would step up the way that generation did to save their country from occupation?

I was shocked when the point of view of the story shifted from one girl to the other mid way through the book.  I didn't see if coming. I agree with you that the reader should try to pay attention to the details because they all come together very near the end of the story.  Though the author does a nice job reviewing those details for the readers so if some of the details are missed  it doesn't detract from the overall reading experience.

Since there are only three high schools in the district and two of us want this book, my guess is that we will be adding it to out Mock Printz list of books for our workshop this winter! (That full list will be out mid-September.)

Two teen librarians agree, Code Name Verity is not to be missed. It may very well be one of the top YA books of the year.

Posted by Anne@HeadFullofBooks at 5:07 PM