Review: A Greyhound of a Girl by Roddy Doyle 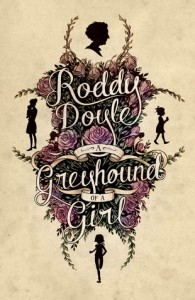 How does that old saying go: What is good for the goose is good for the gander? It is not true in this case. Several reviewers of A Greyhound of a Girl by Roddy Doyle were so complimentary of the book, even giving it starred reviews, that I thought I MUST have it for my library and should consider it for our Mock Printz list. I assumed that I would be as wild about the book as they were. Unfortunately, even though I recognized sweet and charming aspects of the book I wasn't swept away and I don't feel like sharing it with my daughters, as one reviewer suggested we'd all want to do.

The story is set in Ireland with the story coming from four women, representing four generations in one family. One of the women is a ghost and she has come back to give her daughter this message about death---Don't worry. Everything will be grand. You can die in peace. I thought the message, though not terribly deep, was fine. I even shed a tear or two.The dialogue between characters was both touching and quirky, with some Irish sayings mixed in, some I had to guess at the meaning. What I found to be the most off-putting was the way that the chapters alternated between characters and their voices.  Everyone spoke in first person so it was hard to distinguish between the different voices and it wasn't always completely obvious who was speaking. It just didn't work for me.

Upon reflection it occurs to me that this little book, which might be more of a Junior than a YA book, is suffering in my estimation because of it's proximity to other books I am currently reading or just finished.  I adored the book I just finished, Dying to Know You, which was set in England. Now I am listening to a fantastic but very different story, Ready Player One. With two fabulous novels book-ending this one perhaps it just suffers in comparison. It is a fast read so I didn't feel like I was wasting my time but I don't think this book will get much traction in my library among my students. To provide some balance, since I usually don't include negative book reviews, take a look at its review in the Telegraph.  It is very positive and will provide some balance. Make of it what you will.

Posted by Anne@HeadFullofBooks at 4:21 PM