Review: Putting Makeup on the Fat Boy by Bil Wright 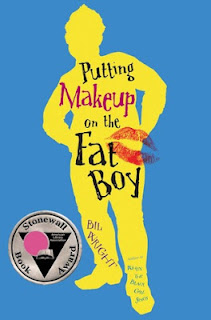 Back in February or March a new student entered our school.  As he was standing at the circulation counter checking out his textbooks I observed his fingernail polish and makeup. Right as he was leaving he referred to himself as a princess. The whole interaction made me smile and it also made me think of this book, Putting Makeup on the Fat Boy by Bil Wright, which had just come in the mail that week. The next time the kid came in I asked him if he'd be willing the preview the book for me. He did. Upon returning it he exclaimed that this book was him and he really could relate to it. That is what I love about books and libraries! Linking up readers with books that speak to them, that are them.

Carrlos Duarte has been good at putting on makeup for as long as he can remember. When a friend, who works at Macys, suggests that he apply to work at the makeup counter Carrlos can't think of anything else. "But the makeup artist world is competitive and cutthroat, and there are hurdles along the way...and Carrlos will have to believe in himself more than ever if he wants to make it to the top." (from the book jacket)

This book, a Stonewall Award book for GLTB youth, is so charming because it is so real. Carrlos is a goofy but lovable kid who makes errors in judgment along the way toward his goal of becoming a makeup artist. But he is devoted to his friends and his family and truly wants to do the right thing if just his enthusiasm wouldn't get in the way. There were so many aspects of his personality that I could relate to or that made me think of students and friends.  If you are a GLTB youth, this book will sing to you.  If you aren't a GLTB youth, it will sing to you, too. It just makes me smile to think about it.  I am so glad that I have it in my collection. I sure that it will find its way in to reader's hands often at my recommendation.

Posted by Anne@HeadFullofBooks at 3:17 PM