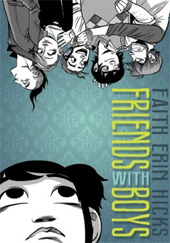 Being homeschooled and raised with three brothers had its problems, but Maggie's life is about to get a lot more complicated as she faces her greatest trial yet - entering public school for the first time!

Faith Hicks started out writing and drawing comics on-line in 1999 and twelve years later she finally has herself a published book, Friends with Boys, which is loosely related to her own growing up experiences of having only brothers, being homeschooled, and having parents who separated briefly.  Take a look at Faith Hicks webpage for more about her career and for sample pages.

I admit that I don't read enough graphic novels to even pretend to be an expert on them. This graphic novel has received a bit of acclaim which is what attracted me to it in the first place and I was pleased to be reading a story about fitting in and what it is like for a new kid in high school. The book also addressed the issues of parent's separation and how difficult that can be on children, and sibling rivalry.  All issues many kids can relate to.  What I didn't understand, even at the end of the story, was the ghost story that ran concurrent.  What did it mean and how did it relate to the story? Because of this confusing aspect, my rating for this graphic novel is only a good to fair. 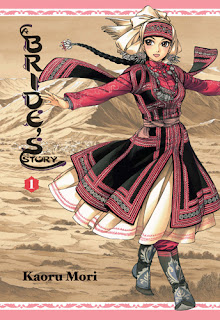 Kaoru Mori brings the nineteenth-century Silk Road to lavish life, chronicling the story of Amir Halgal, a young woman from a nomadic tribe betrothed to a twelve-year-old boy eight years her junior. Coping with cultural differences, blossoming feelings for her new husband, and expectations from both her adoptive and birth families, Amir strives to find her role as she settles into a new life and a new home in a society quick to define that role for her. -Yen Press

The art work in Bride's Story is phenomenal.  At times I was confused about the storyline and about which character was which but I loved the art throughout.  Bride's Story series is the most popular graphic novels in my library right now. Just this book alone was checked out seven times from the middle of May, when I got it, until the end of the school year. I wanted to know what all the fuss was about. I liked it enough to read on in the series, which is rare with me and graphic novels. Even if you have no other reason to pick up this book, do it for the art.

Posted by Anne@HeadFullofBooks at 10:32 AM