Review: Dying to Know You by Aidan Chambers 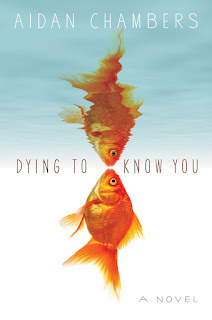 Dying to Know You by Aidan Chambers is a new favorite book, one of those books where I wanted to highlight my favorite passages and repeat them to somebody and write them down so I can reread them some day and sigh. In fact, I did that or will have done that as soon as I publish this blog post.


"Shy, likable Karl is in love with clever, beautiful Fiorella. To prove his affection, she demands that he bare this soul to her in a letter. The difficulty? Karl is convinced he can't write, or at least not well enough for Fiorella, who loves books and words. In a Cyrano de Bergerac-like twist, Karl sets out to convince  Fiorella's favorite novelist to write the letter for him. When the famous author unexpectedly agrees, a series of misunderstandings ensues, resulting in a startling revelation, a near tragedy, and an unexpected friendship that transforms the lives of all three."--from the book jacket

The story is told in the voice of the unnamed 75-year old author who has some heartache of his own. But his age does not detract from this wonderful YA novel, the story very much focuses on Karl, an older teen. The character development in the book is marvelous. It also addresses themes of friendship, love, and attraction. As the story unfolds it grapples with issues related to depression and loss. Characters encourage each other to take new opportunities and being willing to move in new directions as circumstances change. Here are a few of my favorite quotes (no spoilers)---

"Time to make a move. I'd decompose into compost if I stayed much longer." p. 124

"I felt a touch guilty, leaving her like that, but there are times when guilt is no rival to the need to save yourself." p.148

"...one benefit of old age that I should mention, one cause for permanent celebration, one distinct advantage. You aren't a teenager anymore, and never will be so tediously afflicted again." p. 169

Want a very satisfying read this summer? Allow me to recommend Dying to Know You by Aidan Chambers. (By the way, it is drawing a lot of attention from professional reviewers.  So far it has earned four starred reviews. Check out the list of books with starred reviews published in 2012.)

Posted by Anne@HeadFullofBooks at 6:47 PM