Weather: Hot and dry! (We're in Southern and Central California.)

Hiatus: We've been on the road or vacationing for over a week and though I've had access to Wifi for most of that time I haven't felt like blogging. I realize now I should have taken an official hiatus so no one was left wondering about my welfare.

Politics: Just because we're on the road doesn't mean we aren't paying attention to what is happening in the world. In fact, Don and I listened to Sirius radio and the January 6th insurrection Committee hearing on the first leg of our trip. The supreme court's decision to destroy Roe and the troubling allowance of church and state issues are much in my mind. The following political cartoon, illustrations, memes, links, and tweets summarize my feelings.

1. The Myth at the Heart of the Praying Bremerton Teacher (Seattle Times) about the Supreme  Court case allowing prayer in schools. This op-ed is very enlightening about the real issue. 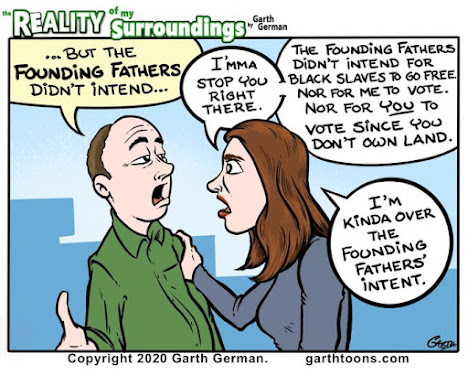 3. About the Supreme Court decision to gut Roe v. Wade. Let's take a minute or two to mourn and then roll up our sleeves and get to work making sure the voters do something about it. 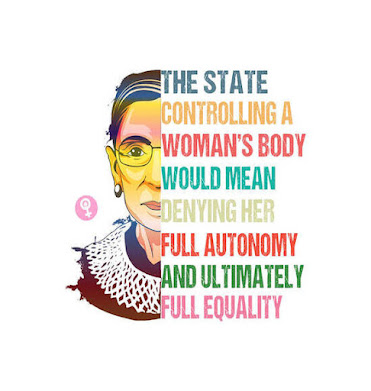 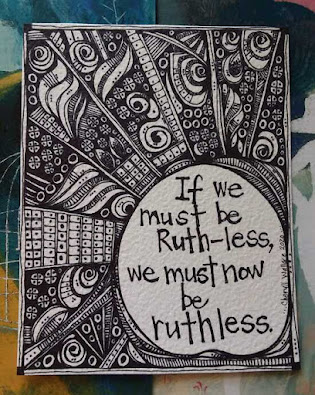 4. Time for a palette cleanser: "Bohemian Rhapsody" performed by Simply Three and William Joseph. Wow. Just wow. (Come on. Have a listen. You deserve it!)

5. The surprise fifth hearing of the Jan. 6th Committee had many revelations which were quite shocking. Will this be enough to finally bring Trump down? Not sure. But Mick Mulvaney, Trump's former Chief of Staff, thinks it might be. When Republicans turn, you know it is bad.

1)Trump knew the protesters had guns
2)He assaulted his own security team
3)There may be a line from ProudBoys to the WH
4)Top aides asked for pardons
5)The commission thinks they have evidence of witness tampering.

That is a very, very bad day for Trump. 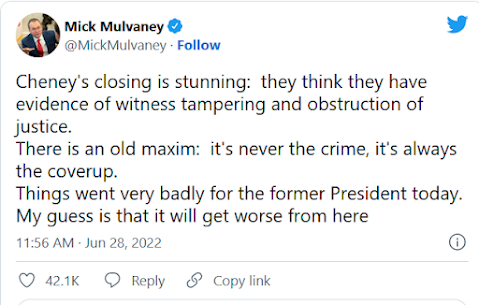 6. I've been thinking a lot about this quote from Dan Rather. I've seen some polling that suggests that the dial is actually moving and people are waking up to the need to vote for Democrats in November since the hearings have started. I have also seen polling that the anti-Roe (anti-women) decision will also be a needle mover. I hope.

Here is a screen shot of the polls taken since the Supreme Court announcement about abortion last week. The poll is for a generic ballot, meaning the question doesn't have any candidate names or district specific races, just "Are you more likely to vote for a Democrat or a Republican if the election were today?" 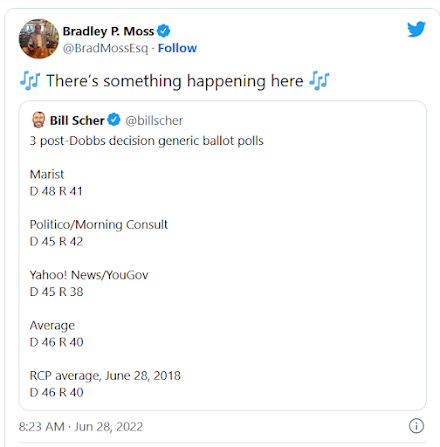 The biggest news for Dem fundraising this month (May ’22) is that May [2022] eclipsed May 2018 by a gigantic margin in contribution numbers, total dollars raised, and unique donor numbers. Since 2018 was a midterm election year, the comparison is important. In addition, dollars raised in May ’22 even topped May ’20 - a general election year!!!

Most important, of course, is why donor activity rose meteorically in May. First is the preliminary decision of the Supreme Court to gut Roe v. Wade.  The early release of a preliminary decision- now verified by the disastrous Dobbs ruling- created a firestorm of public anger & dissent.

Books: I've been reading a bit but not as much as I thought since I pictured myself reading poolside. It is too hot for that for sure. We have finished a few audiobooks so far.

Meet Skimbleshanks and Sasha: Our daughter picked up her new kittens last week and we haven't even met them yet. Now both daughters have two ginger cats.

Posted by Anne@HeadFullofBooks at 7:47 AM