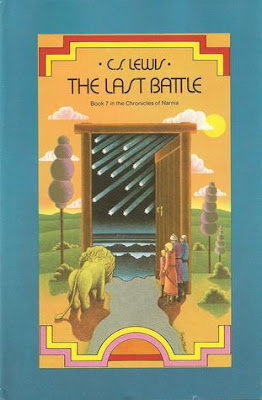 I completed a seven-month challenge, Narniathon21, after finishing the seventh book in the Chronicles of Narnia series, The Last Battle. Having read the book and the series several times in my lifetime, each time I found something new or was struck by a different revelation. Insights from other participants made this a very enjoyable experience.

As I read The Last Battle I couldn't help thinking about the political situation in the US right especially during the first part of the book where the ape, Shift, dresses up the donkey, Puzzle , in a lion's pelt and tells him to pretend he is Aslan. This made me think of Trump as I read about the Ape and how self-serving he was and later how he was at the mercy of his bad advisors as he clung to power. On page ten, Puzzle says he doesn't want to pretend to be Aslan, but Shift tells him they'll fix all the things wrong in Narnia. "'But isn't everything right in Narnia already', asks Puzzle. 'What!' cried Shift. 'Everything right? -- when there are no oranges and bananas?'" Clearly Shift, an ape, is the only one concerned about such things, but he wants to rule Narnia by deceit and lies to get what he wants. Later when the animals accuse Shift of just being an ape he lies and says he is a man, a very wise, old man. "'And it is because I'm so old that I'm so wise. And because I am so wise that I am the only one Aslan is ever going to speak to.'" (29) Reminds me of when Trump declared "I alone can fix the problems in America." Later in the story the Narnians overhear some of the Calormen soldiers talking about Trump the Ape, saying they've grown weary of him and calling him a brute, but admitting that he is a useful tool to get to their goals, to take over Narnia (76). It's chilling, actually, to compare Trump and the Ape.

Well, enough about Trump and Shift, the Ape. On to the Narniathon questions:

1. We’ve come a long way since the Pevensies entered the wardrobe that first led them into Narnia. What are the principal emotions that well up in you as you look back on all that’s happened since then?

Honestly I get very emotional every time I read The Last Battle. This time I focused a bit on Susan not being allowed to return to Narnia because she has devoted her life on Earth to makeup and fashion. This doesn't really square with my understanding of the gospel. This made me feel sad and perplexed. I even read the short story, written by Neil Gaiman, about what her life was like after her whole family died in the train wreck. I wouldn't recommend it. It also doesn't square with how I imagine her story ending. I enjoyed the reunion, of sorts, with all the humans who had entered Narnia, including the first king, Frank and his wife.

2. Many fans of Narnia, knowing the many adverse reactions to this final title, have avoided or otherwise refused to read it. Were you one of these and, even if not, what is your reaction now?

Once again I was more aware this read-through of the racially insensitive information in the book toward the people from Calormen than in the past. I cringed when the king had the children, Jill and Eustace, blacken their skin so they could blend in. Otherwise, I love the description of the new Narnia, further up and further in, as being more real than life in the old Narnia. I honestly hope if there is a real heaven that C.S. Lewis is right that it will be a wondrous place, more colorful and real than the life left behind.

3. At the end of the final chapter Lewis uses the metaphor of a book, whether the Book or another special storybook of which the Narnia tales are merely “the cover and the title page.” Does this metaphor work for you as it is intended to?

I'd never noticed this metaphor before. It is pretty hard to wrap my brain around the concept of eternity but the idea of all the stories we know would fit onto a cover page and title seems like a good place to start.

Lewis selected Saturn as the planet to represent the seventh book, The Last Battle. Saturn is thought to have been the worst planet, "whose influence could easily go bad." I don't know about you, but I'd say Lewis nailed "bad" with the end of the world. However, Saturn's influence might also bring about "godly sorrow, penitential wisdom, and contemplative insight." I love this. We certainly saw sorrow, penitence, and wisdom as Narnia is coming to an end. Father Time has been pictured in early pictures of Saturn. Even the Bible has something to say about Saturn's influence when the prophet Amos speaks against his people for worshiping Saturn (Amos 5:26). Lewis used all these known influences of Saturn to great effect in the book. (Planet Narnia)

I want to thank CalmGrove for hosting Narniathon21 and for being so faithful at communicating with participants. I lost a little steam on the challenge at times, but also enjoyed the new insights I gained from other contributors. I had a little flash of nostalgia as I finished this, the final book of the series. I've probably read it five times in my life and it is possible I will never read it again. At this point I certainly don't feel like I need to after reading it so many other times. But on the heels of that thought, a little voice spoke in my head said, "But what about the grandsons...?" 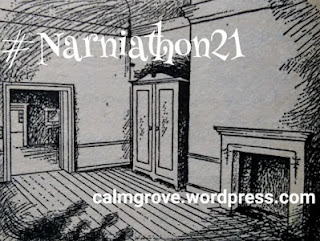 Posted by Anne@HeadFullofBooks at 11:21 PM