Weather: Cold, rainy and windy. It is snowing in the mountains. Lots.

Good News: Now that the election is over I thought I'd fade back into my regular pattern of reporting news from my small life: what I'm reading, eating, watching, etc. But during the election season I caught the bug to look for and report on good news discovered in the past week and I'm not quite ready to give it up yet. Here's hoping you find this information interesting enough to explore the links provided.

With a lot of talk about Native voting in Arizona. I thought I would share 2 maps. The left is a map showcasing all 22 tribes in the state. The right an updated 2020 voting results maps by precinct. This give you an idea of how Indigenous communities voted in the 2020 election. pic.twitter.com/scrWENDVO2

On the lighter side: While the world was holding its breath as it waited for the 'Biden wins' announcement, Trump and his team led by Giuliani, were gearing up to claim voter fraud by holding a presser at the Four Seasons. Only thing, they didn't check the fine print and ended up at the 'Four Seasons Total Landscaping' business in North Philadelphia instead of the fancy Four Seasons hotel near the Liberty Bell in Center City. The jokes just seemed to write themselves from that point forward.

1. Start by reading this account of the event: "The One Where the Dummies Hold a Press Conference at the Wrong Four Seasons."

2. The location of the event was all the more precarious due to neighboring businesses:a crematorium across the street and a sex shop next door. 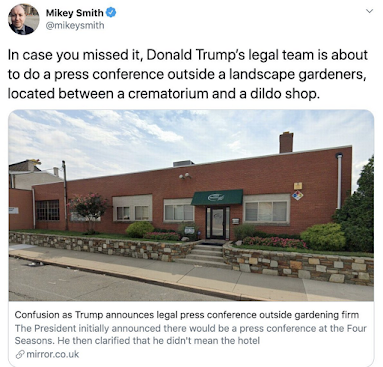 3. The above photo makes the location look presentable. The back side, where the presser was held, not so much. The writers for the hit TV show, 'The Veep', were jealous they didn't think of this for one of their episodes. (Show Biz 911) 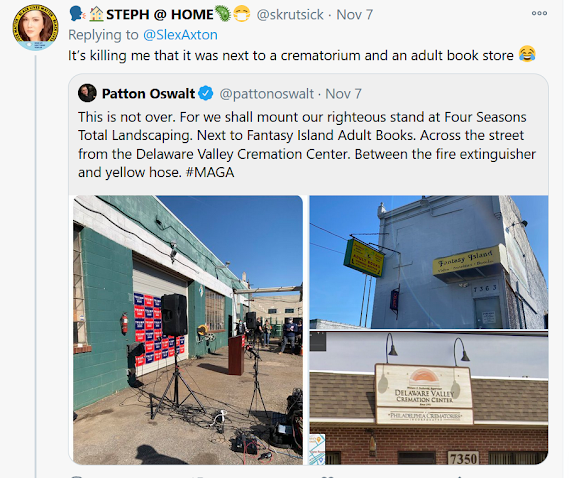 4. And just at the moment when this high quality press conference was getting started, the networks called the election for Biden. The timing couldn't have been any more comedic.

5. After some introductions, the first man featured at the presser was a convicted sex offender and a perennial candidate in New Jersey, not even a resident of Philadelphia as claimed. (Politico) You can't make this stuff up.

6. Even the owner of the sex shop next door thought the whole thing was funny. (Slate)

"I was pretty much in awe of the funniness of the whole situation."

7. And the memes and tweets just started rolling in 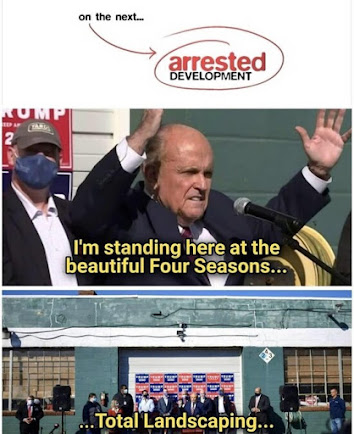 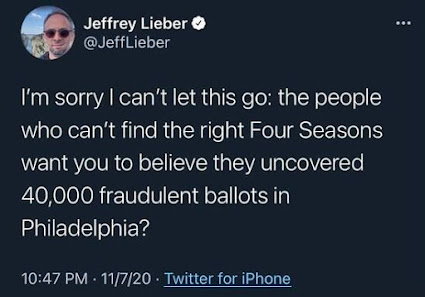 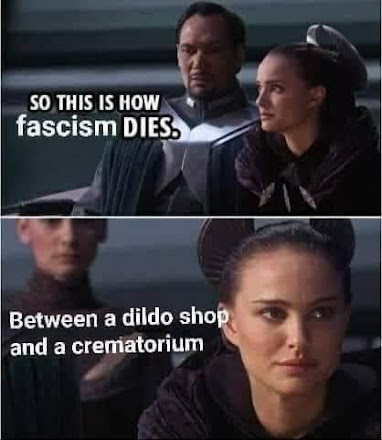 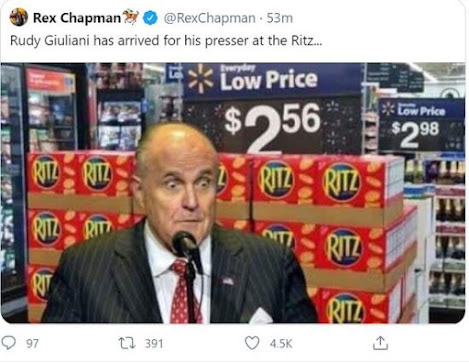 Enough? Okay, I'll stop but I laugh every time I think about it. I hope you got a few laughs from the GOPs inadvertent antics, too. Have a good week. Please drop a comment on how you are doing now that the elections is over.

Posted by Anne@HeadFullofBooks at 8:34 AM