Family News: Ian and Jamie visited several times this week with their mommy. Ian, a three-year-old, is so imaginative. He and I took a hot-tub soak together midday and played at all kinds of imaginary story-lines including making the maple tree seed pods into tiny wings so we could fly away.

Good News: Don had to "talk-me-off-the-ledge" several times this week as the Trump team have continued to make attempts at stealing the election and it seemed like those attempts were getting traction. At one point I didn't think I'd find any good news this week, but I did! Thanks, Don, for keeping me grounded.

1. Georgia finished its recount and the result was the same. They certified their election results. Biden wins the state.

2. "Democracy fights back. Lawsuit alleges that Trump violated the Voting Rights Act." A lawsuit filed yesterday seeks to bring an end to such racist games in vote certification.  Three black voters in Detroit and the Michigan Welfare Rights organization filed THIS LAWSUIT accusing Donald Trump individually, and his campaign, of violating the Voting Rights Act. (DailyKos)

The complaint alleges that the Trump Campaign has “openly discussed their strategy of disenfranchising voters in Detroit and Wayne County.”  The complaint quotes Rudy Giuliani appearing to do just that in his press conference where he claimed what he described as “illegitimate ballots”  that stunningly “were all cast basically in Detroit that Biden won 80-20.“ Giuliani asserted “it changes the result of the election in Michigan, if you take out Wayne County.”  Yes, if you just don’t count the votes of black people, everything changes.

3. "Trump Ally Confuses Minnesota and Michigan in the Affidavit 'Proving' Voting Fraud." Trump's lawyers seem to have confused Michigan and Minnesota. In their filing alleging campaign fraud in Michigan, they listed townships in Minnesota. The incompetence is mind-boggling. (Forbes)

4. "Tucker Carlson from FOX News bashes Trump attorney Sidney Powell for lack of evidence in voter fraud cases." He complained , “We invited Sidney Powell on the show. We would have given her the whole hour,” Carlson said. “But she never sent us any evidence, despite a lot of requests, polite requests. Not a page. When we kept pressing, she got angry and told us to stop contacting her." If Tucker Carlson, who talks about UFOs on his show, sees that there is no credible evidence, you know the GOP has nothing. (WaPo)

5. Mask-wearing works to prevent spread of coronavirus. Two real-time examples in Republican-led states. I know I am singing to the choir here, but you may know someone with whom you can share this info. (DailyKos)

Lighter Side: I honestly thought we'd be done with this category now that the election is done, but this week was ripe with humor.

1. Rudy Giuliani seemed to be literally melting down before our very eyes. Comedians and Twitter had a heyday, rightfully so. How can anyone take this guy seriously? One Trump campaign adviser texted a Washington Post journalist as the black streaks inched toward Rudy’s jowls: “Is he deteriorating in real time?”

See if you can find the Trevor Noah clip about this event. His take is hilarious. Here it is, it is about 5-8 minutes in. (The Daily Show)

Rudy Giuliani won this category two weeks in a row! 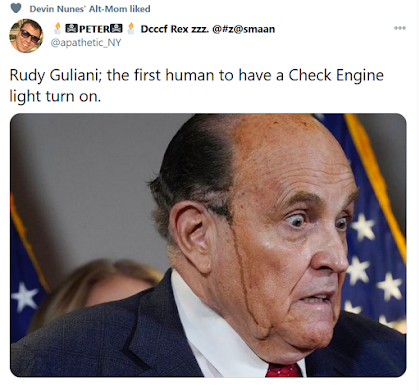 2. This is the second funniest thing I've seen all week. Watch the clip all the way to the very, very end. (It's only a minute long.) The guy, who tells the reporter that he isn't stupid, proves he is. Ha ha! Stop the recount. Do a recount.

3. Spoken truth. Sadly the Republicans are working on mass distribution of the virus (not the vaccine.) 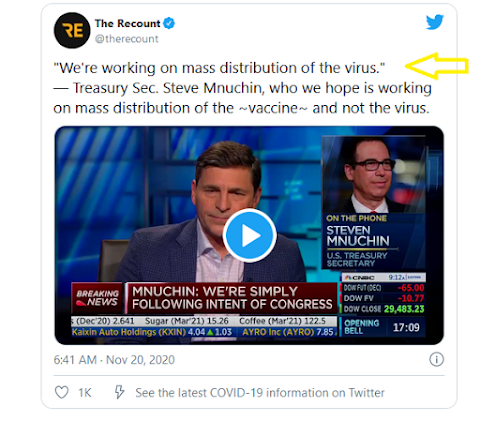 4. Geraldo Rivera suggested that the coronavirus vaccine should be named for Trump because of all he has done to help develop it, or some such nonsense. Brian Williams, on his show The Eleventh Hour, was taking a different take on that suggestion---one involving LOTS of sarcasm.

Soooo, Brian Williams has run out of fucks to give 😂 pic.twitter.com/vh2xXABreI 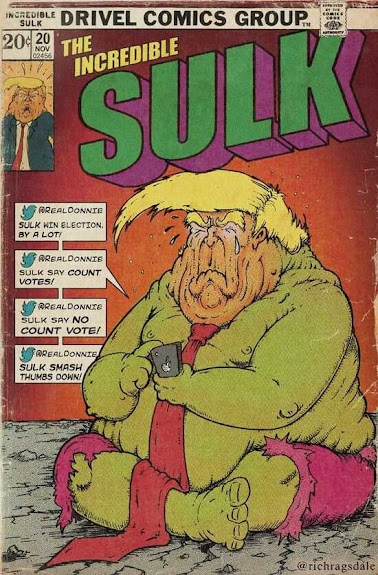 6. Bob Ross, back from the dead, helps us color Georgia...blue. 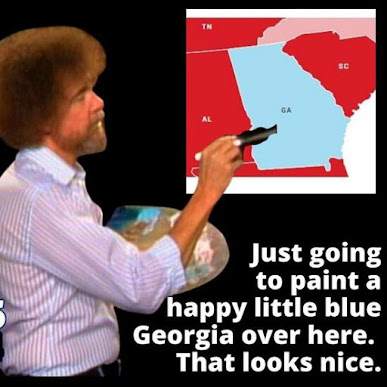 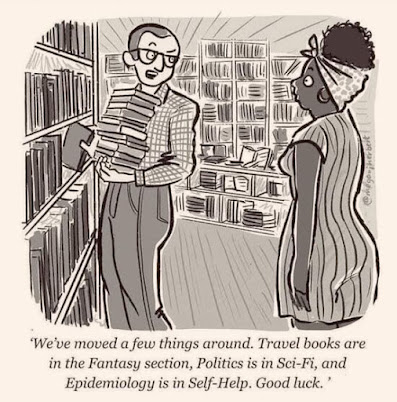 Thanksgiving prayer: This prayer, from the poem by Ralph Waldo Emerson, is a family tradition to recite together before important meals. This Thursday we will gather with our immediate family for a scaled down Thanksgiving meal. But we are thankful that we'll be together and that no one has COVID-19. Staying safe is more important than gathering in a large group and exposing people to the virus! 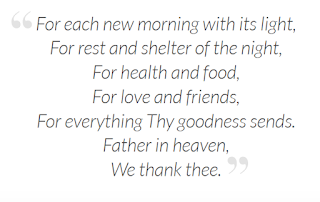 Cats and boxes: Fred and George are enjoying a big box that makes playing so much more fun. It reminds us of a few lines from the book Jillian Jiggs by Phoebe Gilman:

Posted by Anne@HeadFullofBooks at 1:34 PM