A rather frivolous and funny  topic. Just about any title could be used by bands for the names of their groups. I live near a freeway sign which was used as the name of fairly famous rock band, Sleater-Kinney. So I know that anything can used as a band title. 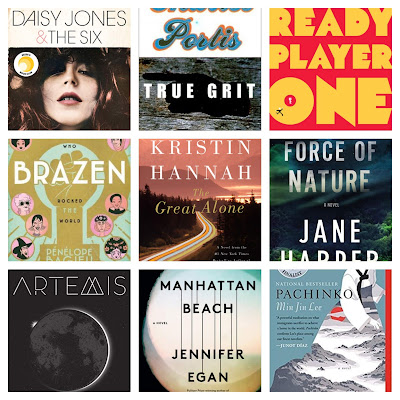 1. Daisy Jones and the Six (Reid)---Ha ha. This is cheating since it is the title of rock band in a book.

2. True Grit (Portis)---Doesn't this have a nice ring for a country group?

4. Manhattan Beach (Egan)---Maybe a funky name for a jazz group out of New York.

5. Pachinko (Lee)---Take a Korean/Japanese game and name a K-Pop group after it.

6. Brazen (Bagieu)---How about this for a title of a kick-ass female rock group?

7. Artemis (Weir)---How about this title for a techno group?

8. Force of Nature (Harper)---Sounds like the title of some strong group, maybe a hair rock band.

9. The Great Alone (Hannah)---Would be a great title for a band out of Alaska since it comes from a poem by Robert Service about that state.

-Anne
Posted by Anne@HeadFullofBooks at 3:14 PM