THE BOOK OF BOOKS 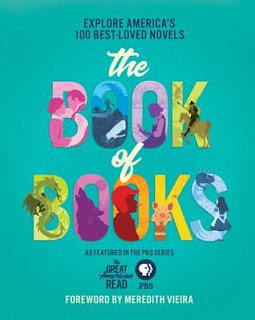 Back in 2018 PBS launched an eight-part series called THE GREAT AMERICAN READ "that explored and celebrated the power of reading, told through the prism of America's 100 best-loved novels (as chosen by a national survey). It investigated not only those pieces of literature but delved into the authors, what makes for good reading, how writers write, and how reading, even though we live in a diverse country, is such a human experience and can broaden our understandings of that diversity.

I only tuned in once or twice during the TV series but I did participate in the voting. Americans were encouraged to vote for their favorite book out of the 100 and could vote once a day. I changed up my vote every time I voted because I loved so many of the selections. On the last show of the series the favorites of the favorites were revealed. Take a look here for that list.

THE BOOK OF BOOKS is the print edition of the 100 best-loved novels. The text for this book was written by Jessica Allen. She did a very even job describing the reason this or that book made the list. At one point I wondered if she indeed had read and loved each of the books herself.

Only novels were chosen for the project. Each title is categorized into a genre and only one title per author was allowed but within the description of that book the body of work from that author would be highlighted. Oddly, in my opinion, some of the books didn't seem worthy of the list because they were so poorly written (Twilight and 50 Shades of Grey, specifically) and several of the top choices seem to relate more to the current TV mini-series than on the books themselves.

Of the 100 best-loved novels, I've read 59 of them. Many of the books on the list I have no interest in ever reading but many others are already holding a spot on my TBR list (to-be-read list) and the effort of reading this book has mad me want to add several others. For the rest of this blog post I thought I'd find the sentence or two from the description of these unread books that makes me want to read them.

Books I want to read and why, including a quote and the (page number):

-Alex Cross Mysteries by James Patterson---"The Cross mysteries share several characteristics: They drop readers straight into the action, with virtually no backstory or lengthy descriptions" (9). Also, for as prolific a writers as Patterson is I figure I should read at least one of his books. Should I start at the beginning with Along Came a Spider or just jump in anywhere?

-Americanah by Chimanmanda Ngozi Adichie---"In her fiction and nonfiction, Adichie seeks to further gender equality and espouse human diginity, with the understanding that every experience is unique" (13). I enjoyed her thoughtful booklet, We Should All Be Feminists. It is time I try her fiction writing.

- Doña Bárbara by Rómulo Gallegos---This novel is probably the most read and beloved of all Latin American novels and I've never heard of it before. For this reason I want to give it a try at least. Plus, it features "lush descriptions of the Venezuelan plains as well as its residents, the novel blends fantasy and suspense" (69).

-Dune  by Frank Herbert---I just bought an e-book version of this classic 1965 novel so I hope to get to this one soon. Herbert is from my state, a fact I just recently learned, which increases my interest. "In addition to its conservationist themes, Dune explores many philosophical issues, such as the way religion might be manipulated to achieve power, the nature of inheritance, and the use of drugs to expand the mind" (71).

-Foundation Series by Isaac Asimov---Like my rationale for wanting to read a Patterson book, I want to read something by this prolific Sci-Fi author. "In 1966, The Foundation series won a special Hugo Award for Best All-Time Series, beating out Tolkien's Lord of the Rings...It's a reading project worth the effort, though, as the Foundation books testify to an amazing mind with singular powers of creativity" (79).

-Frankenstein by Mary Shelley---This classic novel was already on my TBR list, but this description reinforced my desire to actually read it. "It's a novel of ideas, asking vast, thorny questions about science, ethics, and psychology. Who gets to play God? What is the price of knowledge? What do we owe those we usher into the world?" (81).

-The Grapes of Wrath by John Steinbeck---Another title already on my TBR but I just finished East of Eden so I am not sure how soon I want to jump into another Steinbeck tome. "The book won the Pulitzer Prize and the National Book Award...Both Eleanor and Franklin Delano Roosevelt talked publically about their great respect for the book, particularly as they stumped for policies meant to pull Americans out of the Depression's lingering effects" (97).

-Hatchet by Gary Paulsen--- This book read by elementary students in my school district was hands-down the favorite among the boys. Even my daughters loved it and talked about it incessantly. "The Hatchet series has been praised for its ability to persuade reluctant readers to give books a try, and for its transfixing depiction of how one boy transforms into a man" (111).

-The Intuitionist by Colson Whitehead---I'm a fan of this author. "The Intuitionist reads like a hard-boiled detective novel" (125). Sounds like a good enough reason for me to give this one a try.

-Moby-Dick by Herman Melville---I timidly add this book to my list of hopefuls. Deb Nance, another book blogger, says it is her favorite book. I've never really considered reading it before but D.H. Lawrence said it is, "one of the strangest and most wonderful books in the world. It moves awe in the soul" (161).  Trying to categorize the book is difficult, too. "It's simultaneously a psychological study, an exegesis of the Bible, a work of philosphy, an allegorical treatise, a cautionary tale about the dangers of revenge and ambition, an epic prose poem and a textbook on 19th-century whaling."

-Pillars of the Earth by Ken Follett---"Follett himself was excited to transform his lifelong interest in cathedrals into an epic tlae of adventure, war, romance, religion, and politics...the novel isn't a dry series of facts wrapped around a bunch of characters--instead, it's a compulsively readable saga about fascinating people undertaking a fascinating project" (181).

-The Wheel of Time Series by Robert Jordan---As a librarian I was always having to organize this series back into its numerical order to make it easier for readers to find their next read. I never really considered reading any of the books myself until now. "Fate and free will, larger-than-life battles, ecstacy, agony, victory, defeat. All of it, and more, is right here" (237).

-White Teeth by Zadie Smith---Over ten years ago I read over 100 pages of White Teeth. I read it fast and ferociously, then I set the book aside and never picked it up again. I want to give it one more try. "Critic James Wood invented the term hysterical realism to describe Smith's debut and similar novels that combine social realism, stylized prose full of pyrotechnics and digressions, and elaborate, twisty plots" (241).

We'll see if my desire to read any/all of these books fades with time. Because, as Frank Zappa said, "So many books, so little time."

Enjoy whatever book you are reading right now. I am still making my way through Lonesome Dove, which, by the way, is on the list of 100 best-loved novels.

-Anne
Posted by Anne@HeadFullofBooks at 2:15 PM