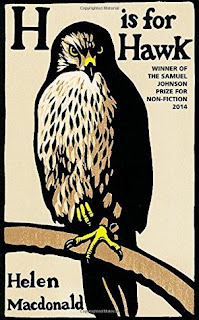 Last month I listened to the audiobook of H is for Hawk by Helen MacDonald. I had my eyes on the book since 2015 when it was published because it kept showing up on everyone's reading lists and I hate to left out if there is a book everyone is reading. I knew little about the book other than it was a memoir and the obvious, it had something to do with hawks. As I started listening to it I was surprised at how unprepared I was for the subject. And, to be honest, how uninterested I was in any information about obtaining and training a hawk. Any other reader than me would have turned off the audiobook and said, "no, this is not for me", but I have this thing about finishing books and, in this case, I had purchased the book from Audible so I would finish it even if I wasn't interested. I'd paid for it.

As is often the case, things aren't always what they appear in the beginning. That was the case with H is for Hawk. Yes, it was a memoir about a woman who trained a hawk but it was also about a life of passion for birds of prey, about grief and life-changing events, and, surprisingly, it was about T.H. White, the author of The Once and Future King, the most famous Arthurian tale ever written.

I may not have been interested in training hawks but I was fascinated by what I learned about T.H. White and his life. Helen MacDonald remembered reading, as a child, a book written by T.H. White about training a hawk called the Goshawk. Even as a child she recognized that the steps White took to train his goshawk were all wrong. She would not repeat his training steps but she did reveal aspects of his tortured personality brought on by a ghastly childhood throughout her memoir. In Goshawk White said he had read a book on falconry when he ran across this phrase, "the bird reverted to a feral stage."  This phrase caught his imagination. He wrote later, ''A longing came to my mind that I should be able to do this myself. The word 'feral' has a kind of magical potency which allied itself to two other words, 'ferocious' and 'free.' ''  This led White to obtain his own goshawk to train and I think it also led to an idea about a person becoming an animal, ferocious and free. That concept was used later when he wrote The Sword in the Stone, his prequel to The Once and Future King. In that tale, the young protagonist, Wart (King Arthur), is turned into different creatures by Merlin so that he can learn the lessons of life. Among those creatures Wart is turned into a bird of prey who has to contend with a much bigger more aggressive goshawk. 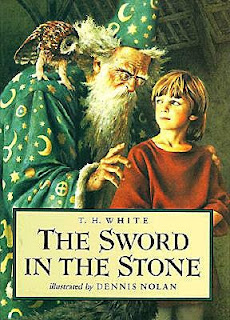 As I listened to H is for Hawk it dawned on me that I have never read anything by T.H. White. I was familiar with The Sword in the Stone because of the Disney animated movie made in 1963 and his further Arthurian tale in the movie Camelot (1967), which I loved. I own an old copy of The Once and Future King so I set to work reading it immediately. But the reading was slowed by the size (small) of the font, so I got a copy of the The Sword in the Stone from the library and have been plodding through it since then. I wouldn't say it was my favorite book. One friend, remarking on my reading choice, told me she read it as a child and laughed her way through the book. I think I gaped at her. Is the book funny? Not until today, as I was nearing the end of it did I find a few passages that struck me as funny. But I have long known that humor is very much glued to a time period. What was funny yesteryear isn't as funny today. I was also struck by how difficult I found the text to be. Did kids really read it and enjoy it. Another thing that has gone by the wayside---kids wanting/choosing to read books which are difficult. Honestly, I would have done better if this book had been the audiobook I listened to.

That being said, I found a delightful quote near the end of the book. Merlin is preparing Wart for another lesson, this one as a badger and he tells Wart that this will be the last time he will change him into another animal. He goes on to say,

“The best thing for disturbances of the spirit is to learn. That is the only thing that never fails. You may grow old and trembling in your anatomies, you may lie awake at night listening to the disorder of your veins, you may miss your only love and lose your moneys to a monster, you may see the world about you devastated by evil lunatics, or know your honor trampled in the sewers of baser minds. There is only one thing for it then--to learn. Learn why the world wags and what wags it. That is the only thing which the poor mind can never exhaust, never alienate, never be tortured by, never fear or distrust, and never dream of regretting.”

Sometimes a great quote makes reading a whole, challenging book worth it! 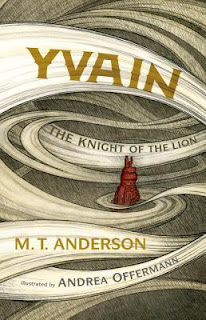 The third connected book I read this week is titled Yvain by M.T. Anderson. It is not about hawking, though there is a lovely illustration of bird of prey wearing its little mask in it. It is not about T.H. White. It is a graphic novel of a retelling of the Yvain, knight of the Lion, another Arthurian tale. This epic poem was probably written in 1170 by Chrétien de Troyes about the same time the Lancelot tale was written. This retelling by M.T. Anderson, beautifully illustrated by Andrea Offermann, was just published this year. I am fairly sure that this tale is not nearly as well-known as the Merlin/King Arthur/Lancelot tales, though I think today's generation may not be very familiar with any of these tales. It is a pity, really. Anyway, Sir Yvain sets out from Arthur's court on his personal quest. Along the way he encounters all kinds of challenges and falls in love. But he is immature and does not fulfill a promise which causes his love to spurn him. In order to win back her love he goes out and finds ways to save many more people and matures within himself. The reader, however, is not quite sure if there is true love awaiting him in the end.

So there you have it. One month. Three books. Connected.

Posted by Anne@HeadFullofBooks at 5:04 PM