Weather: Raining. It has been a windy, rainy week. The weather station says we've had three separate storms. The word "storm" is relative, of course.

Super Sad/Worried/Distressed: I don't know about you but the state of affairs in our country is really, really making me distressed, or worried, or sad, or angry. I don't even know what to focus on anymore---the news is always so bad. // The other day a friend posted a comment on Facebook about how progressives are just like Nazis and just as violent. What? // Another friend said that after the horrific shootings in Las Vegas that killed 59 people that citizens of our country feel the same about guns as they did before the shooting. How can that be? // Our president doesn't think that the people in Puerto Rico need more assistance than they have. Yet, some still don't have drinking water and most don't have electricity. And there are more people from FEMA in Houston still than in Puerto Rico. Argh! // After the conference Trump attended this week, it appears that Evangelical Christians are aligning themselves with white supremacists in terms of support and ideals. Will this be the end of the church as we know it? // And don't even get me started thinking or talking about the possibility of a nuclear war. Our president seems unhinged enough to imagine that he could start such a war...one to end all of mankind. // Psychologists are diagnosing Trump with Malignant Narcissism. Click on the hyperlink if you want to know more about that disorder and to make yourself more terrified.  // I could go on, but I will stop.

Today in church: I was thinking about these quotes from Jim Wallis: 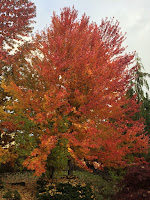 "Why did 81 percent of white evangelicals support Donald Trump? The polling shows it was not mostly about abortion, gay marriage, and religious liberty, as some of their leaders suggest. ...But those “moral issues” were not the main motivators for the white evangelical vote. Instead, it was guns, taxes, how much they would make from the economy, anti-immigrant and anti-refugee sentiment, and anti-terrorist and anti-Muslim visions of national security.

Fox News seems to have set the white evangelical political agenda, more so than the Bible all evangelicals claim to believe."

“When Christians ally their faith with bias and exclusion, they are influencing how the public sees Christianity itself. "


Fortunately, our scripture lesson and the sermon were based on Psalm 145, which has some strong reminders that God is bigger than Trump and God's precepts are stronger than the unloving ones espoused by some of his "believers" today. It was good news I needed to hear.

Your kingdom is an everlasting kingdom,    and your dominion endures through all generations.
The Lord is trustworthy in all he promises    and faithful in all he does. -Psalm 145:13
Cybils Nonfiction Judging: I have been a reading fiend.  I am attempting to read, or judge, five books a week. As a judge I am allowed to stop after 50 pages if I can adequately evaluate the book at that point. So far I haven't evoked the 50-page rule but I am sure I will i the future as I try to read all 55 of the books by the end of December. So far I've read 15. Not bad, huh? So far I've read two books on Alexander Hamilton, four others on rights for women (past and present), three books on animals (extinct and living), one on weather, another on a space flight to Pluto, and few biographies of famous people. I find it all fascinating. I love learning new stuff.

Books completed in the past two weeks:


(Can you tell what I have been doing in my retirement?)

Carly met her nephew: And it was love at first sight from both sides. They just seemed to have that really special "something" right away.  It was good to have her home for a few days!

Movie: "Battle of the Sexes." It is excellent. (The 1973 tennis match between Billie Jean King and Bobby Riggs became the most watched televised sports event of all time. Trapped in the media glare, King and Riggs were on opposites sides of a binary argument, but off-court each was fighting more personal and complex battles. With her husband urging her to fight for equal pay, the private King was also struggling to come to terms with her own sexuality, while Riggs gambled his legacy and reputation in a bid to relive the glories of his past.)

Posted by Anne@HeadFullofBooks at 10:14 PM