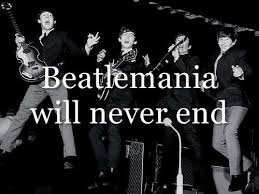 As promised (You haven't been holding your breath, I hope) here is my second installment or report on the progress of my latent Beatlemania. (In case you missed it, here is the link to the first Beatlemania report.)

Since Sirius Radio introduced a Beatles Channel in May I've been all about the Beatles...again. I say AGAIN because I was all about the Beatles when I was young and then, like almost everyone, I got over their breakup and got on with my life. But I decided that this new Beatlemania brings me back to the original question, "Why, oh why, did the Beatles breakup?" Ultimately, I have decided, that is the question people want an answer to and yet no answer is adequate because, after all, whatever the answer they never got back together.

Several years ago a married couple whom we were good friends with suddenly got a divorce. We were in shock. We didn't know anything was wrong with their marriage, yet they were unwilling to reconcile and that was it. We were  devastated. It was as if we were thrown out at the same time as the divorce. Of course we looked around to blame someone for our loss and decided it was the wife's fault, since she had been unfaithful to her husband. Whoever was guilty, the relationship was over and we never had any chance at a good resolution as far as our friendship was concerned.

I tell this sad little tale just to remind myself that is what happened to most of us when the Beatles broke-up in 1970. None of us saw it coming and we weren't prepared for it. We loved all four of the Beatles but we needed to blame someone so for many people it was either Paul's fault or John's. We let our anger reside on that person and looked around for confirmation of our position. I decided that I needed to read about the Beatles to find our what I could to answer the breakup question once and for all. 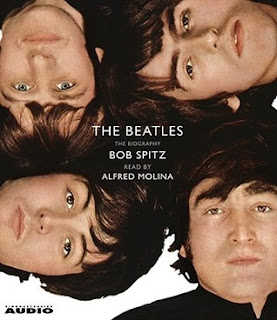 The first book I read was The Beatles: the Biography by Bob Spitz. The print edition of the book is nearly 1000 pages yet the audiobook I listened to was only eight discs long. That means I listened to a deeply abridged version of the book. Though I learned quite a bit, especially details of the boys beginnings:  John's abandonment by his parents and his mother's early death; the death of Paul's mother at a young age; Ringo nearly dying several times from diseases we seem to have conquered today; George's seemingly regular life to a loving mother; and the early iterations of their band with several other friends playing other instruments, even though none were particularly musical. I learned a bit about how their summer gigs in Hamburg really laid the framework for the band we know today because of the sheer volume of music they had to put out. They had to play for four to six hours a day. Can you imagine?

When the boys returned to England, George because he was too young,  Paul and Pete (their drummer) because of fighting, followed eventually by John, they played the Liverpool scene and caught the attention of Brian Epstein, who became their manager and was the one who got a recording session organized. And the rest is history.

Here are a few other things I learned as I listened to this biography: 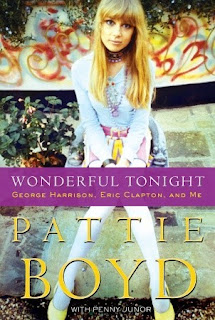 The second book I read was Wonderful Tonight by Pattie Boyd. It was a autobiography by the woman who was the muse for the wonderful Harrison hit, "Something" and later two hits by Eric Clapton, "Layla" and "You Look Wonderful Tonight". Since this book wasn't specifically about the Beatles but about a person tangentially related to them I didn't learn that much about the Fab Four but did gain some insights about George Harrison, her husband. One thing that struck me as I read this book---George and all the Beatles were so young when they got started. In 1960, when they officially became the Beatles John was 19, Paul 18, and George 17. Ringo didn't join them until 1962. But when they formed up in the groups that predated the Beatles, John was 16 and Paul was only 15. I say this because when I think about all the immature behavior that is reported in this book, I have to remind myself how young the boys were. No wonder they fell into such a wild lifestyle.  We know about George's interest in Indian music and meditation, for example, but Pattie reports here that he would meditate for days, then emerge and binge on cocaine. It doesn't sound like they had the happiest marriage, for obvious reasons. 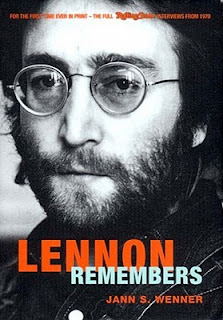 My next selection, which I confess I skimmed, was Lennon Remembers: The Full Rolling Stone Interviews of 1970 by Jann Wenner. Less than twelve months after the breakup, Rolling Stone magazine meets with Lennon several times and writes it up in interview format. It was too soon. Lennon was angry and egotistical. He wasn't ready to think of anything outside himself and he spoke with no filter. He pretty much slammed everything and everyone except himself. Did McCartney write any good songs? Well, maybe "Yesterday" was pretty good. That's it. Pete Townsend? Terrible?  Just about everyone involved in music in the 60s? Rubbish.  He had just recorded his first single album and was talking up his song "Mother", which he felt would be his next big hit. It may not have been a huge hit but it revealed Lennon's deep sadness and anger at being abandoned as a child. Yet, I didn't feel any pity for Lennon after reading this book but it did confirme what I was thinking about 'divorce.' Lennon was sad that the Beatles dissolved but he wanted to blame others and not look inward at all. I'd say skip this book unless you want a rude awakening.

Lastly I spent a little time with a graphic biography called The Beatles: All Our Yesterdays. No new ground was plowed here and I am not even sure that all the facts are reported correctly but it was fun to "see" The Beatles according to Jason Quinn's imagination. One thing I did like was the lists of special Beatles stats. For example: at one point in April 1964, they had five songs in the top five slots on the charts.

I still have one book in the wings, Sgt Pepper at Fifty. Enough on The Beatles for one night. Do you have any good books on the Fab Four that you recommend?

Posted by Anne@HeadFullofBooks at 6:10 PM