TTT: Halloween-themed books I've never read (but may consider reading in the future) 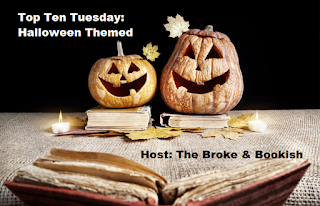 I am not much for scary books but these books keep showing up on must-read lists so I might consider reading them in the future. Please let me know if you think any of these books are worth the effort and the fright they will cause me.

1. The Haunting of Hill House by Shirley Jackson (1959) it is considered one of the most terrifying tales of the 20th century.

2. The Fall of the House of Usher and Other Tales by Edgar Allan Poe (1839) I think I read a bit of Poe in junior high but haven't touched it sense. The title story is supposed to have one of the ghastliest conclusions of any ghost story.

3. The Ghost Stories of Edith Wharton (1937) I haven't heard of this book before but I like this author and would consider giving one of the stories a try.

4. Dracula by Bram Stoker (1897 I actually have the audiobook version of Dracula so I have no excuse for not listening to it.

5. The Turn of the Screw by Henry James (1898) considered to be quite unsettling but not overtly creepy.

6. Something Wicked This Way Comes by Ray Bradbury (1962) probably not the creepiest book on the list so I might pick this one up first. I like Bradbury's writing style.

7. It by Stephen King (1987) I put this down but I sincerely doubt I could ever make myself read it. I get scared by the previews of the movie.

8. Roald Dahl's Book of Ghost Stories by Roald Dahl (1984) Perhaps this collection would be tame enough for me to conquer but Dahl said this about the books: "Spookiness is, after all, the real purpose of the ghost story," Dahl writes. "It should give you the creeps and disturb your thoughts."

9. The Girls by Emma Cline (2016) Not intended as a ghost story but described as "haunting."

10. The Worst Best Halloween Ever by Barbara Robinson (2004) I actually want to read this book. I loved Robinson's first book, The Best Christmas Pageant Ever.

What is your favorite scary book!

Posted by Anne@HeadFullofBooks at 5:34 PM