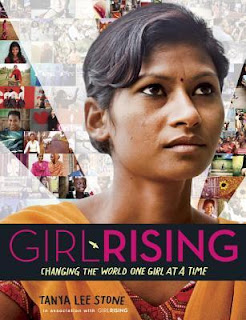 Several years ago a documentary film was made called "Girl Rising." The producers of the film traveled around the world looking for girls who were eager for education but unable to go to school for a variety of reasons, usually economic. They eventually told the inspiring story of nine of these girls. Tanya Lee Stone, a nonfiction author watched the film with growing excitement. "I had a sense of the enormity of the topic." As she thought about this, she said her "book brain" clicked in. She wondered how many girls the producers interviewed before narrowing down to nine. She started thinking of ways to explain the obstacles to education and to highlight more stories untold my the documentary. With permission from the producers, Stone used their resources, added some of her own research, and wrote this nonfiction narrative inspired by the film.

Girl Rising: Changing the World One Girl at a Time is divided into three parts: the stakes, the stories, and the solutions.

The stakes: In many impoverished families worldwide girls are not sent to school. If there is a little extra money, families are much more likely to send sons for an education. But if a girl is educated:

"The act of educating girls is the single most powerful tool societies have to make the world a safer, healthier, and more functional place."

The stories: Every girl has a story. Yet often they are not valued as much as boys and not offered the same opportunities as their brothers. There are also lots of obstacles which keep girls out of the classroom: modern day slavery where girls are sold into servitude by their parents, sometimes at very young ages; early marriage; limited access to required fees due to poverty. Over twenty girls have their stories told in this book. All of them have had some sort of assistance to help them get to school.

The solutions: What can we, just regular people, do to help? This is a very short section of the book but contains several powerful examples of solutions a few people have found to help. And there are success stories, too. Girls who have been educated, giving back to their communities as nurses, teachers, radio programmers. The book is inspiring and a call to action.

When I retired last June everyone asked me what I planned to do with my time and I didn't know. I knew what I didn't want to do, but I didn't know what I did want to do. I got very excited about this idea proposed in the solution section of this book. Is there something I can do to help make sure that girls around the world have the opportunities they deserve to be educated? The idea is taking hold and I am ready to start my own research process to discover how I can get involved. I want to start by looking into the UN's program, GirlUp; Room To Read; Let Girls Learn, an Obama initiative; and, of course, Girl Rising. Maybe I have found my new vocation. We'll see.

Posted by Anne@HeadFullofBooks at 9:01 PM