News of the World...a wonderful audiobook

Title: News of the World by Paulette Jiles 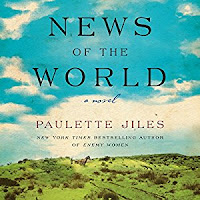 Plot:
The plot is remarkably simple. Captain Kidd is asked to deliver Johanna to her only living relatives 400 miles over rough and dangerous terrain, one filled with natural barriers (rivers, deserts) and man-made obstacles (political and financial.) Johanna, who completely embraced the Kiowa culture, does not want to go. She wants to return to "her people", her Indian father and mother. She is wild by many standards: eating with her hands, throwing away her shoes, preferring the floor to a bed. But she is smart about nature, knows how to handle a revolver, and is a good problem solver. Nevertheless, as the miles pass, Capt. Kidd and Johanna form a bond of friendship and comradery.

Themes: What makes a family? How is trust developed? How far does responsibility go? What does honor look like? The importance of balanced news. And historically, what was life like in Texas in the 1870s?

About the author: Paulette Jiles is also a poet. She researches her topics extensively and picks her words carefully. When asked, at the National Book Award ceremony, who she writes her books for, Jiles said she writes for herself. In fact, she said, she enjoys rereading her books and looking for typos.

The audiobooks: You know, if you are a reader of this blog, that I like listening to audiobooks, so it won't surprise you that I selected to listen rather then read News of the World. But actually my decision to choose the audiobook was even more calculating than usual. I first read about ten pages of the print version and was frustrated by the lack of quotation marks. I like the fiction I read to use proper punctuation and will often get frustrated without it. I'm not saying I was frustrated by the print edition of News of the World, it just had that potential so I decided to switch to the audiobook. And the decision was a good one. First, I got to share the book experience with Don. We listened to it as we drove to Oregon and back last weekend. Don loves Western fiction and knows much more about the history of the US Army than me. Secondly, the audiobook narrator, Grover Gardner, had a perfect voice for the book. He has a real folksy style that comes across as authentic for the time and the setting. Thirdly, since the book is short (213 pages) the audiobook isn't prohibitive in terms of time. It is only 6 hours long, perfect for a short road trip.

Review: I really, really enjoyed this book. Capt. Kidd was a complex character. The peeks at historical events: War of 1812, Mexican-American War, Reconstruction Texas, were fascinating but not overwhelming. Both Captain Kidd and Johanna were misfits in a world where they no longer fit. I found myself cheering for these underdogs and for their unlikely triumphs.

What I learned: In addition to the peeks at historical events I learned that Johanna's difficulty assimilating back into life after the time she spent with Kiowa tribe was not unique. Research done by Jiles on the topic revealed that children who were captured and raised by Indians then rescued and returned to their original culture, did not assimilate well. Even if they only lived in the Native-American culture for just a year, they felt like misfits for the rest of their lives once they were returned to their families. One of the characters in book explained it this way, "In their minds they went. When they came back they were unfinished. They are forever falling." The book has a lot of heart and it touched mine.