Midnight at the Electric, a book review 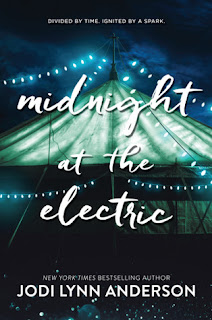 "Divided by time. Ignited by a spark."

Midnight at the Electric is one of those magical novels which is both historical and futuristic at the same time. It presents a mystery, over 100 years in the making, and likely it will suck even the most reluctant readers into its multifaceted story line.

Adi Ortiz has been chosen for a great honor---to be one of the few who will colonize Mars. The year is 2065. As part of her training she has to move to Kansas and fortunately she has a long-lost relative not far from the training site, Lily, who is willing to house her during the months preceding the launch.

When Adi moves into Lily's house she discovers a post card mailed in the 1920s which references a tortoise which still lives on the farm over 100 years later. Adi is so intrigued by the cryptic message on the card that she starts investigating about the lives of both the author and the recipient of it. Her investigations uncover a mystery, which unwittingly involves both Lily and Adi.

At this point the story shifts to Kansas in the 1930s when the whole region was experiencing the huge, devastating problem called the Dust Bowl. Catherine, a teen living with her mother and younger sister, writes in her journal about her fears for their safely and for her sister's health. Young children were especially susceptible to a type of pneumonia caused by breathing in all the dust, making the lungs fill with a kind of mud. It was a deadly problem. In her desperation to save her sister, Catherine falls for the claims of a charlatan who promised a complete cure if they would show up at midnight and touch his electrical device. A few days later, their mother, Beth, almost dies in a dust storm. Because of this near miss, she hands Catherine a pile of letters to read. Letters which will change her life.

Once again the point-of-view shifts, this time to 1919 England. Lenore is writing to her friend, Beth, about her sadness after losing her brother in the Great War. She wants to come to America to visit her friend but circumstances are preventing her from traveling.

Surprisingly, Galapagos, the elderly tortoise, ties all three of the women together. Each of the girls---Adi, Catherine, and Lenore---fight for their own self determination. They each want a better future for themselves and for their loved ones. And all three of the girls learn that in order to move forward one must be willing to sacrifice something and leave it behind, knowing that love and self-acceptance will move forward with them.

Midnight at the Electric is a treasure. It is one of those books that is both a joy to read and to think about after the last page is finished. Jodi Lynn Anderson, who has published several YA novels already, has certainly hit a home-run with this one. It is interesting historically without being boring. It is thoughtful without being too sentimental. The characters are likable without being cloying or stereotypical. The book has earned six starred reviews and will likely be in the mix when award committees convene in the winter to discuss winners. I recommend it with and an enthusiastic YES!

Posted by Anne@HeadFullofBooks at 3:27 PM