Labor Day: Tomorrow is Labor Day in the USA which always marks the end of summer vacation and back-to-school for me and millions of teachers and school children. But since I retired this past June, this will be the first time I will not be going back-to-school since I began kindergarten in 1962. I have very bittersweet feelings about it. Did I make a mistake in retiring too soon? I have this little voice in my head saying that sort of thing. This past week I volunteered at the school for eight hours checking-out iPads to returning students. I visited with many of my old colleagues and enjoyed myself but I also got to reflect on the mess we left behind after a long day, knowing I didn't have to clean it up. This week I have plans to join two friends for breakfast, something I could never do on the first day of school.  I am claiming this scripture today as move into my retirement years:


God is not unjust; he will not forget your work and the love you have shown him as you have helped his people and continue to help them. (Hebrews 6:10, NIV)

Tea Party: Last summer my Australian friend, Claire, and I hosted a tea party for my book club friends whom she had met on her first trip to Washington. We made scones and other pastries. Claire made a pavlova which was a scrumptious treat. This year, in memory of last year's party, I invited book club friends to join me at a local tea house, The Secret Garden, for a tea party and a 60 for my 60th celebration. We had so much fun. Tiny tea sandwiches or delicious salads, scones with whipped cream and lemon curd, and so many tea choices it was hard to choose. Thanks gals for joining me. Let's do it again next year! (This brings my 60 for my 60th up to 56!) 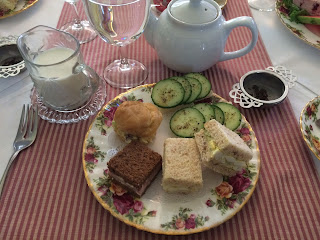 Baby watch: still no baby. But we are on watch and not making many plans that can't be easily canceled.

The Beatles obsession continues: I am still obsessed with everything related to my favorite rock/pop group. This week Sirius radio is playing a list of 100 favorite Beatles songs as voted by their listeners. Today Don and I caught the top five as we hopped in the car after church so we drove around for a half hour to listen to the end of the list. We have no idea where some of our other favorites landed on this list. Don said how could we choose a favorite child? We love so many of their songs. Here are the top five in reverse order:
(I just got back from a trip to COSTCO and I caught the program again, this time I heard #11-6...11. Eleanor Rigby, 10. Yesterday, 9. Let It Be, 8. Something, 7. Strawberry Fields Forever, 6. Here Comes the Sun.)

Food Chemistry: Before Carly left this week to return to New York, she and I experimented with food, attempted to make fruit juice caviar or balls. I was so hopeful that we would be able to make these delightful oddities. But no. We tried and tried and had no luck. The whole kitchen was in a complete mess and we had no juice caviar to show for it. Ha!

Currently reading:
Watching: Don and I watched all six episodes of The Tick in rapid succession one night last week. What a fun new series offered on Amazon Prime. If you have it, we recommend you watch it.
Now we are into Anne with an E on Netflix, a reworking of L.M. Montgomery's Anne of Green Gables. Love it.

China: Don and I just bought plane tickets for a trip to China in November with our friends Ken and Carol. We are super excited. It will be our first big trip of retirement.

Have a wonderful week. Happy back-to-school!