Weather: We have been living in the middle of five different rainstorms which have been evenly spaced about 48 hours apart. The weatherman on the TV news called them "atmospheric rivers." that should give you a pretty good idea how wet it has been around here lately.

Unexpected day off of school: In conjunction with storm #2 (or was it #3?) there was quite a bit of wind. Many of the buildings in my school district lost electrical power Wednesday morning so the school day was cancelled. It was like a snow day without the snow. But just like a snow day, it was a bonus day for me. Without other plans or responsibilities I was able to finish the Christmas decorating AND, this is the biggest deal, I was able to finish my audiobook, The Nightingale, all four hours I still needed to listen to before it was automatically returned to the library on Thursday.

Darkest day since 2006: This is a weird statistic but the headline of the newspaper reported that our weather was making even our daylight times seem darker than usual and so we hit a weird record---the darkest day in the past ten years. Can you tell the weather has been a big topic of conversation lately? Wait, I'm not done.

Worst fire drill, ever: During lunchtime on Thursday, in the midst of storm #4 (or whatever number, all I know is it was pouring down rain), some bozo kid pulled the fire alarm and we all had to tromp out of the building and stand in the pounding rainstorm for 15 minutes while they got things sorted inside. 15 minutes! Every single person was soaking wet even if they had an umbrella or raincoat. Then coming back in the building we were expected to just go back to teaching as usual as if we weren't completely soggy. One teacher said she sat down for a bite to eat and when she stood up she noticed the puddle she had created on the chair. Ugh.

Christmas Programs: I remember the days when my daughters were in public schools and involved in out-of-school musical/dance groups December would be almost laughable how many programs we had to attend. Once Don and I had to split up so he could attend one program with one daughter while I attended another program with the other. Those days are long gone now. And I miss all the lovely Christmas music. Well, this week I did something about it. Tuesday we went to here the Puyallup Valley Band play their Christmas program at the local Elks Club.  They are a rag tag bunch of musicians with hearts as big as they come. What they lack in talent they make up for with enthusiasm. Thursday evening I attended my school's annual Christmas program where every choir and orchestra plays at least one piece with several combined pieces. 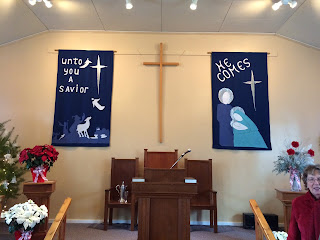 Christmas Cantata: Every December our church choir takes the annual Christmas Cantata on the road to sing at a tiny little church up in the mountains near Mt. Rainier. It always feels a little like a Courier and Ives Christmas card when we arrive at the little white church in the tiny village of Mineral. But the music was wonderful and so uplifting. Afterwards we had dinner with our daughter and son-in-law at their home nearby. We just got home (hence, the late edition.)

Today is the Third Sunday of Advent: Have a listen to this lovely rendition of Grown Up Christmas List by Evynne Hollens.

Posted by Anne@HeadFullofBooks at 9:38 PM