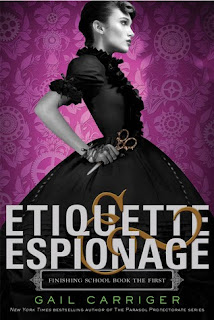 Etiquette and Espionage, Finishing School. Book the First by Gail Carriger.
A reviewer interviews her daughter after listening to the audiobook together.

Mother: EE1, as I shall now call Etiquette and Espionage, Finishing School. Book the First, is set in the same world as Gail Carriger's very popular Parasol Protectorate series. Please describe that world for people who haven't read any of the books in that series.

Daughter: I haven't read that series either. Well, it takes place in the late 1800s in Victorian England in a world where vampires, werewolves, and possible mythical creatures exist. There is a Steampunk element with mechanical maids and droids, with flying machines and other odd technologies. The finishing school is in a flying dirigible.

Mother: You and I discussed whether or not we felt that this book would qualify as high fantasy.  What are your thoughts on the subject?

Daughter: As I understand it, High Fantasy involves worlds beyond or outside our own. High Fantasy involves mythical creatures that don't exist in our world.  This book certainly involves those elements but more on the lines of Low Fantasy. I think it would be better described as the Steampunk genre since it is set in Victorian times with mechanical creatures playing a role in the plot.

Mother: At the same time as listening to this audiobook you were also reading The Lucy Variations by Sara Zarr.  When I asked you about that book, you told me that you didn't care as much about that book as you did about this book.  Please elaborate on what you meant by that.

Daughter: The imaginative world created by Gail Carriger was much more enthralling than the teen drama, angst of The Lucy Variations, which I found annoying at times.  EE1 was a nice escape from reality and a story to get wrapped up in.  Though it did require my rapt attention. If my brain wandered for one moment, I could lose the thread of the story easily. There is the mystery element to the plot, which kept me involved and, of course, it is very humorous in places.

Mother: In your opinion, what types of my readers should pick up this book?

Daughter: If you, like me, are an avid Fantasy reader that enjoys fantastical worlds and magic. If you are a fan of Harry Potter and other such books EE1 will be a natural selection for you.  It is lighthearted and easy reading. Since the main character, Sophronia, is a female this book may be more attractive to female readers. The adventure side of this book may be enough to attract male readers, but aspects of the finishing school, like learning to flutter one's eyelashes or store handkerchiefs in decolletage, are definitely female activities. Since this is the first book in a series, subsequent books may appeal more to males if the mechanical, espionage, and adventure aspects are played up. That will remain to be seen.

Mother: As a busy college student you still squeeze in time to read for pleasure but refuse to start series books. Why do you feel so strongly against starting books in a series? How did this book work for you even though it is the first book in a series? Do you think you will want to read on as sequels are published?

Daughter: I refuse to read books in a series until the series is finished because I end up pining after books then I have to wait months or years until the next book is published. By that time my interest has probably waned. I was tricked into listening to this book with you. I didn't realize it was a series when we started. It is very clearly a first book in a series because the universe gets more and more complicated with many details introduced but unresolved. I'm not sure, at this point if I will read on. If the next book in the series were to come out right now I would definitely read it, but I'm not sure what my interest level will be in a year. I do want my sister to read it, though.  This book is just up her alley and she isn't as off-put by books in a series as I am.

Mother: We listened to the audiobook together. I know that I enjoyed it very much. How did you feel about this recording in comparison to other books you've listened to in the past?

Daughter: The reader of EE1, Moira Quick, did an excellent job switching between different ascents and distinguishing voices. Listening to it helped with pronunciation of names such as Sidheag and Dimity. She kept the story moving along at a nice clip. It never dragged. You and I finished listening to it in three days, which is some sort of record for us and audiobooks. Here is a soundclip of EE1 from Soundcloud for your listening enjoyment. (Soundclip.)

Mother: You are helping me read through a pile of books that are potential Mock Printz contenders this summer. This book was on the pile based on the many starred reviews it has received.  Do you think we should or should not include this book in our 2014 Mock Printz list?

Daughter: No.  Although it is well-written and enthralling, the fact that it is so clearly a first book in a series with so many details unresolved, I don't think it will be selected as a Printz award winner.  I do recommend it to readers grades 6 and up, but I don't think you should add it to your Mock Printz list.

Mother: Thanks for joining me on this project and for helping me with this review. I'm with you. I loved the book, want to read sequels, will recommend it to my readers, but don't think it makes a good Printz contender.  EE1 would make a better Odyssey Award contender, the award given for outstanding YA Audiobooks. I highly recommend this book in that format.