Retrospective Wednesday is an opportunity to highlight a book published in previous years that deserves attention. Today the highlighted book is The Silver Chair by C.S. Lewis, #4 in the Narnia series. 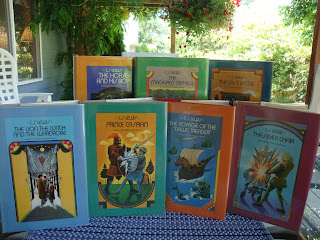 If you haven't read or reread CS Lewis' wonderful Narnia series I wholeheartedly encourage you to do so, the sooner, the better. Published in 1953, The Silver Chair was the fourth Narnia book, a high-fantasy series appropriate for young and old alike.

I first read the series in the late 1960s when a friend of my mother loaned me her set of books. I had never read anything so wonderful in my entire life. When my children were young back in the 1990s, I reread the series but this time aloud to them. Both of my daughters have extremely fond memories of the books and the time we spend reading them together. Then, a few years ago, Hollywood started making movies of the series, starting with The Lion, the Witch, and the Wardrobe. The three of us started rereading the series in preparation for the movies. Unfortunately, the project seems to have stalled out after the third book, The Voyage of the Dawn Treader.

A few years ago, as I perused through a used bookstore, I eyed a complete hardcover set of the seven Narnia books. They were rather steeply priced at $75. I bought them and now rather proudly display them. But it was not until my daughter and I finished rereading The Silver Chair two nights ago that I actually noticed that the set is a 1st edition of the American Publisher: Macmillian and Co. This pristine set is worth over $1000 and what seemed like a steep price when I purchased it, now seems like a bargain. (See the photo above.)

In addition, these old books are also full of the delightful illustrations by Pauline Baynes. When reading aloud one must remember to stop and show the pictures to the listeners. Here Jill and Eustace enter Narnia. 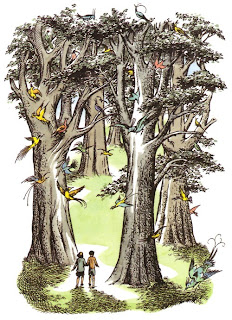 Now about the order of the books.  When C.S. Lewis first published the books, he began with The Lion, The Witch, and the Wardrobe and published one book per year from 1950-1956. The Magician's Nephew, published 6th, is a prequel to the story. When Harper-Collins started publishing the books, the decision was made to reorder the books into chronological order. Resist the temptation to read them in this revised order and follow C.S. Lewis's original order.


Peter Schakel, in his book Reading with the Heart: The Way into Narnia, says it this way:


The only reason to read The Magician's Nephew first [...] is for the chronological order of events, and that, as every storyteller knows, is quite unimportant as a reason. Often the early events in a sequence have a greater impact or effect as a flashback, told after later events which provide background and establish perspective. So it is [ ...] with the Chronicles. The artistry, the archetypes, and the pattern of Christian thought all make it preferable to read the books in the order of their publication ----Schakel, Peter. Reading with the Heart: The Way into Narnia. Grand Rapids: Erdmans. 1979.

Don't start with The Silver Chair, because it is the fourth book in the series.  If you've never read the books before start with The Lion, the Witch, and the Wardrobe. You won't be disappointed. Let the magic begin.

Posted by Anne@HeadFullofBooks at 11:05 AM