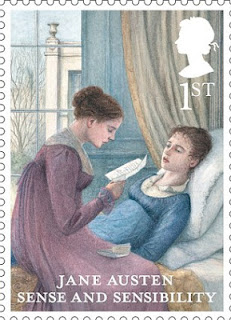 I've been off-the-grid for the past week so this post is a day late. My apologies.

50-Page Goal Met? No. In addition to not having enough time to blog, I haven't been reading much either. I did read 42 pages, Part 2, Chapters 9-14, ending this weeks reading on page 207.

Action: Marianne now knows that Willoughby is to wed another woman, a rich woman, and she is completely undone.  She just wants to leave and go home to her mother. Mrs. Jennings tries to tempt her out of her sadness with rare foods and social events. Col. Brandon shares with Elinor that a young charge of his was impregnated by Willoughby who left her destitute. Though Marianne  hears this new information, she is not completely ready to consider him a cad. On a rare outing, the sisters end up bumping into their half-brother John Dashwood. He asks them to introduce him to the Middletons and to Mrs. Jennings.  Soon the families are socializing together often. The Steele sisters, who are staying with the Middletons, end up in the social mix also, which ends up being advantageous for Lucy as she has an opportunity to meet Mrs. Ferrars. Elinor thinks that Edward's mother is a snob but Lucy thinks otherwise. During this time Charlotte, Mrs. Jennings daughter, has a baby, forcing Marianne and Elinor to socialize more with the Middletons, the Steeles, and their sister-in-law, Fanny. Edwards makes an awkward visit while Lucy happens to be visiting. Elinor seems resigned to her lot in life without him.

Surprises: On my last update I reported that there were few surprises and that the dialogue was very familiar as it was very close to what has been used in the movies.  This section is the opposite.   Few of the details were well known to me and little of the dialogue was familiar. It is hard to imagine life so ordered by social rules. Marianne and Elinor seems to be genuinely tortured by how much time they have to socialize with the Middletons, the Steeles, and their sister-in-law. Apparently unmarried women had very few opportunities to move about freely in society without the escort of a married woman.