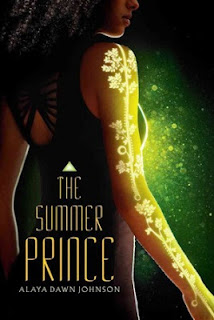 The Summer Prince by Alaya Dawn Johnson is a potential Mock Printz selection based on its reviews. It is a dystopian novel set 400 years in the future in Palmeres Tres, a pyramid-shaped city in what is now Brazil. The story begins as the city is preparing to elect the next Summer King, a figurehead male elected every five years. All Summer Kings are killed at the end of the first year after selecting the Queen who will reign after him. June and her friend, Gil, trick their way into the selection ceremony so that June can do a reflective thing with her art. While there they both fall in love with Enki, who becomes the next Summer King. Enki, who comes from the lowest tier of society, is wildly exotic and complex. After he becomes Summer King he spends his time romping around the city doing performance art with June, hosting wild parties, and messing with the Aunties, or the ruling class. Ultimately June, Gil, and Enki form a love triangle with a twist since Gil and Enki become homosexual lovers.

As the story progresses the inequalities in this "utopian" city become more and more apparent and the residents are poised for a revolution. Issues related to uses of technology, isolationism, and the power structure come into focus.

June, our heroine, is a lot like teenagers today: sullen, impulsive, headstrong, and slightly naive. She  fights with her mother and tries to get away with stuff at school. yet, in a lot of ways she is a very likeable character who is just trying to make her mark on her city. She does it with her art, which isn't what we'd consider art. She finds ways to infuse her art into murals, dances, even her skin. Eventually we find a city in trouble and Enki seems to be leading the charge toward some big change, or is he? And June soon gets tangled up in the mess, too.

Several things bugged me at the beginning of this book which took awhile for me to overcome.  First, the language and use of words confused me.  Ms. Johnson uses lots of unrecognizable words throughout the book.  Are they made-up words or are they actual Portuguese slang words currently used in Brazil? Secondly, the title of the book is wrong.  Enki is the Summer King, not the Summer Prince. Was it so titled so that the reader would know that Enki was young and hip and "princely", not old and stuffy and "kingly"? I also had a hard time getting any traction on my reading of this book in the beginning. But on closer reflection that was probably more a reflection of where I was mentally than about the book. Putting all of these things together it was a hard-starter for me and I really struggled with the first half of the book, so much so that I decided to go back and look at the professional reviews of the book again to remind me why we chose it as a potential Mock Printz selection. After doing that and as I forced myself to read on I found myself immersed in this exotic world of Palmares Tres and cheering on the exploits of the Summer King and his friends. The ending has a surprising and wonderful twist which left me feeling very satisfied.

Here is what a few of the reviewers have to say about The Summer Prince:

Johnson paints a brilliant picture of a seemingly lush paradise hiding a core rotted by class stratification, creative stagnation, and disenfranchisement. Evocative, disturbing, and exhilarating, this story leaves much for the reader to ponder, from the nuanced characters to fascinating central themes, including the impact of technology and the role of isolationism in a perilous world.- Booklist starred review

In her YA debut, Johnson depicts a future that's recognizably Brazilian and human-June may have nanohooks, holo screens, and light implants, but 400 years on, teens still resent their parents and find ways to subvert the technology their elders theoretically control. With its complicated history, founding myth, and political structure, Palmares Tres is compelling, as is the triple bond between June, Enki, and Gil as they challenge their world's injustices. -Publisher's Weekly starred Review

Rife with political turmoil and steeped in culture, this unique and highly fantastical dystopian romance is both intriguing and imaginative. Johnson excels at building rich and gorgeously complex worlds, and her prose shines with a sophistication that's uncommon in YA literature. -School Library Journal

With grace and precision, The Summer Prince walks the line between literary lyricism and good old-fashioned science fiction storytelling. Johnson has created a city that lives and breathes on the page, its samba rhythms and sea breezes balanced by algae stink and rusting spiderbots.- Petra Mayer, NPR Book Reviews

And an interview with the author which offers many insights that are helpful in understanding the story. Follow this link to the NPR interview with Alaya Dawn Johnson.

I'm not sure that The Summer Prince will make it onto our Mock Printz reading list or not.  But I will do my best to represent it well to the selection committee.  It you have read it, or after you read it, please let me know what you think of it.  I am eager to hear other opinions.

Posted by Anne@HeadFullofBooks at 10:05 AM