Christmas in Plains by Jimmy Carter 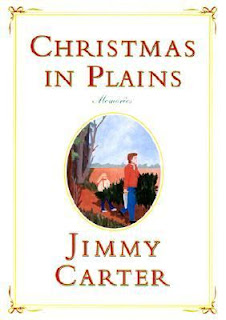 In a beautifully rendered portrait, Jimmy Carter remembers the Christmas days of his Plains boyhood- the simplicity of family and community gift-giving, his father's eggnog, the children's house decortions, the school Nativity pageant...and the poignancy of his black neighbor's poverty. (-From the book jacket)

Jimmy Carter, the 39th President of the United States of America, is quite an accomplished writer/author. Quite often he writes about political things, which seems like a dumb and obvious thing for me to say, but sometimes he writes about his life as a young child growing up in rural Georgia during the Depression. Christmas in Plains is one such book. In this small book Jimmy Carter recalls stories of long ago Christmases in an America very different that today. As I read through his stories and recollections I felt like I was listening in on a conversation with him. It was as if I had sat down with President Carter and asked him to tell me what Christmas was like during the Depression or what it was like living on a farm. And once he was done telling me those stories he told me about what Christmas was like in the White House. The stories were simple and plain and told without a lot of elaboration or dramatic moments. The conversational tone of the book was very endearing.

Both of my parents were born and live through the Depression so I enjoyed his tales of simple Christmas traditions and happy memories but I think that the average reader would think that the book bordered on boring-not enough drama or humor to keep the average reader reading. I do believe that people my parents age would appreciate this book much more than the set I hang out with...teenagers.  And for contrast I actually really like his book: An Hour before Daylight : Memories of a Rural Boyhood  much better than Christmas in Plains. In that book he talks about what it was like to live in the segregated South during his childhood and how his best friends, until he was school-aged, were black.  His stories are fuller and more detailed which gives them some depth and tremendous insight. I found that book to be fascinating and eye-opening.

So I hope that you do decide to read something written by Jimmy Carter, I just don't think that Christmas in Plains is the one you should "cut your teeth" on.