Half Brother by Kenneth Oppel 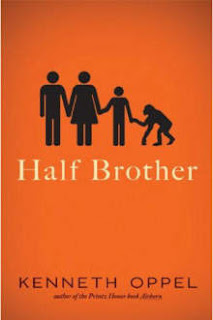 For thirteen years, Ben Tomlin was an only child. But all that changes when his mother brings home his new “baby brother” Zan - an eight-day-old chimpanzee. Ben’s father, a renowned behavioral scientist, has uprooted the family to pursue his latest research project: a high-profile experiment to determine whether chimpanzees can acquire advanced language skills. Ben's parents tell him to treat Zan like a little brother. Ben reluctantly agrees...It isn't long before Ben is Zan's favorite, and Ben starts to see Zan as more than just an experiment. His father disagrees. To him, Zan is only a specimen, no more, no less. And this is going to have consequences. Soon Ben is forced to make a critical choice between what he is told to believe and what he knows to be true -- between obeying his father or protecting his brother from an unimaginable fate.

Half Brother isn’t just a story about a boy and a chimp. It’s about the way families are made, the way humanity is judged, the way easy choices become hard ones, and how you can’t always do right by the people and animals you love. In the hands of master storyteller Kenneth Oppel, it’s a novel you won’t soon forget. -Goodreads

A student, one of my Mock Printz readers, returned Half Brother by Kenneth Oppel to the library last week with this prediction: "This book is going to win.  It has everything a good book needs. I laughed, I cried, I cared." She was the first student to tell me much of anything about the book, so I was thrilled to hear that we'd made a good selection. This past week-end I shared Half Brother with my whole family as we listened to the audio version together as we traveled for Thanksgiving.  And guess what?  We laughed. We cried. We cared.  In fact, at the end of the trip we had to sit in the car for an additional half hour after arriving outside my daughter's dorm so that she could hear the end of the story. I love sharing good books with my family!

I stumbled upon an interesting interview with Kenneth Oppel in Huffington Post called Writing Half Brother: Love, Control, and Talking Animals. I recommend that you read the whole article but here is a small quote from it to get you started:


Certainly I was interested in the controversial animal rights issues inherent in the story -- Imagine, as a teenager, being told to treat a chimp like a baby brother, while never forgetting that it was also a lab specimen. Imagine watching your mother and father indulge in a bizarre form of parenting - one in which the baby was nurtured, but also emotionally manipulated, and ultimately coerced into performing. To the father, the baby is only of value as long as it gives him what he needs.

I really, really liked this book and highly recommend it. This is my first book by Oppel and I am ready to read more by this talented author.

Posted by Anne@HeadFullofBooks at 8:26 PM